As his team-mates prepare to face Manchester City in the League Cup semi-final, the banned Uruguayan striker has told Goal.com of his desperation to lead the Reds to silverware
EXCLUSIVE
By Ash Rose

Luis Suarez is hoping to move on from the controversy of his recent race row and fire Liverpool to both a trophy and a top-four finish once he returns from his eight-match suspension.

The striker, who will miss Wednesday evening's League Cup semi-final with Manchester City due to the ban he received for racially abusing Patrice Evra in October, believes Kenny Dalglish's side have the ability to secure silverware for the first time since their FA Cup triumph six seasons ago, as well as to get back into the Champions League.

The Anfield outfit have fully supported the 24-year-old throughout the disciplinary process following his controversial attack on the Manchester United full-back, and he has now insisted that he wants to repay his club on the pitch.

Liverpool have not won any silverware since their famous FA Cup triumph in 2006, when they won an epic final against West Ham in the last final to be held at the Millennium Stadium

“I want to win a trophy for Liverpool,” Suarez exclusively told Goal.com.

“When I  came here the team hadn’t been doing so well but we are a much better squad  now and we are capable of winning a trophy and getting back into the Champions  League.

"Last year I was lucky enough to win the Copa America with my country,  something which I never thought I would do and we made history. Now I want  to win something with Liverpool. 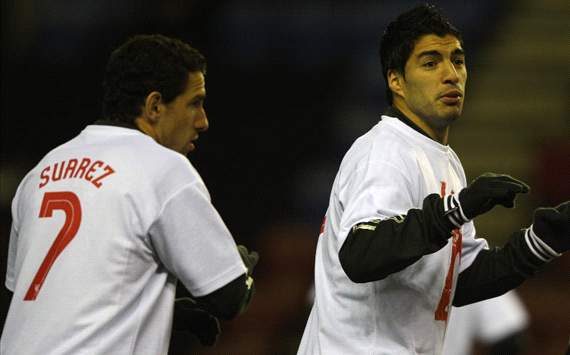 Suarez has been a phenomenon on Merseyside since joining from Ajax 12 months ago and, despite admitting to being "extremely upset" over his FA ban, has stated he wants to remain with Liverpool for a long time to come.

He said: “I was so excited to sign for Liverpool, it was a dream come true and I hope for  a long career with them. I grew up watching them and they are a club with such a big  history, especially in the Champions League, and fantastic players.”

The Uruguayan also moved to praise team-mate Steven Gerrard, who has recently returned from a two-month spell on the sidelines due to an ankle infection. The Reds skipper has been in fine form since making his way back into the side and Suarez is in no doubt that the midfielder will provide a boost to the squad.

“Steven is a great player, I didn’t realise how good until I came here," he said.

"He trains  how he plays and is a fantastic player and servant for this club. Having him back  will help the team.”

The forward still has six games of his suspension remaining and will be unable to appear for Dalglish's side until February at the earliest.