The 2003-04 season marked the pinnacle of Arsene Wenger's reign in north London, but their decline since then has corresponded with Sir Alex Ferguson's men rising from the ashes
ANALYSIS
By Steven Saunders

It was the pre-eminent rivalry of the turn of the millennium - Manchester United against Arsenal, a chiselled Scot's mind games against the debonaire Arsene Wenger.

Sir Alex Ferguson infamously welcomed the Arsenal manager to these shores by telling him to "keep his mouth shut, firmly shut" just months into his reign at Highbury.

Instead of words, the Frenchman struck back with trophies. A domestic double in 1998, another in 2002, and then the pinnacle of sporting perfection - an entire league season unbeaten.

Arsenal's Invincibles of 2004 marked the high point of Wenger's reign, and finished a remarkable 15 points ahead of Manchester United.

But Ferguson licked his wounds and rebuilt his team, and 2005 was the last time Arsenal finished ahead of United in the Premier League. What's more, Wenger hasn't lifted a league title since 2004 - Ferguson has guided United to four titles and a Champions League triumph.

From Ruud van Nistelrooy to Cristiano Ronaldo to Javier Hernandez, Ferguson has rebuilt his side continually; Wenger stands accused of failing to address the serious fallibilities in his squad, and the departures of Cesc Fabregas and Samir Nasri pile further pressure on the Arsenal manager to use the transfer funds available to him.

Here, we chart the season-by-season decay of Arsenal's empire, and the simultaneous regeneration project undertaken by Ferguson...


Almost as soon as Arsenal had lifted the Premier League trophy at a sun-kissed Highbury, Ferguson was plotting his revenge.

The undoubted star of Euro 2004 was Wayne Rooney, and United were not going to be denied in their pursuit of his signature.

They prised him away from boyhood club Everton at a cost of £25.6 million, the highest fee ever paid for a teenager.

At Highbury, two eras began departing at the same time. Martin Keown and Ray Parlour represented the team that Wenger inherited in 1996, Nwankwo Kanu and Sylvain Wiltord the foreign dimension the Frenchman had augmented on the squad. The only notable arrivals were Mathieu Flamini and Manuel Almunia.


The arrival of Jose Mourinho - Uefa Cup winner with Porto in 2003, followed by Champions League success in 2004 - spelt trouble for both Wenger and Sir Alex.

The duopoly was broken; Chelsea stormed to the title with a record number of points, and to worsen the pain, Rafael Benitez's Liverpool pulled off the Miracle of Istanbul to become European champions.

At Arsenal, Patrick Vieira finally ended years of speculation by joining Juventus in the summer of 2005.

Meanwhile, Ferguson finally found the one thing he'd been looking for since 1999 - a replacement for Peter Schmeichel. Edwin van der Sar arrived from Fulham, and Park Ji-Sung marked United's first foray into the Asian market.


Arsenal's last season at Highbury had its fair share of excitement, with Wenger's team reaching the Champions League final only to miss out thanks to two late Barcelona goals in Paris.

They also narrowly overcame local rivals Tottenham for fourth place on the final day of the season, Spurs' squad having been decimated by food poisoning before they faced West Ham.

The main transfer saga though involved Ashley Cole, who finally left Arsenal for Chelsea after an acrimonious pursuit by the Blues, William Gallas heading in the opposite direction. Robert Pires and Sol Campbell were other Invincibles to depart, while Wenger took a leaf from Fergie's book and spent big on a teenager - the relatively unheralded Theo Walcott joining from Southampton for an initial £5m, rising to £12m with add-ons.


Just three years after trailing in behind the Invincibles, United soared to the Premier League title an incredible 21 points ahead of Wenger's side.

Ferguson built from a position of strength, with Carlos Tevez joining as well as Owen Hargreaves, Nani and Anderson. Among a clutch of youngsters to leave Old Trafford that summer was Giuseppe Rossi, now starring for Villarreal, but fellow departees Gabriel Heinze and Alan Smith have not fared as well since. 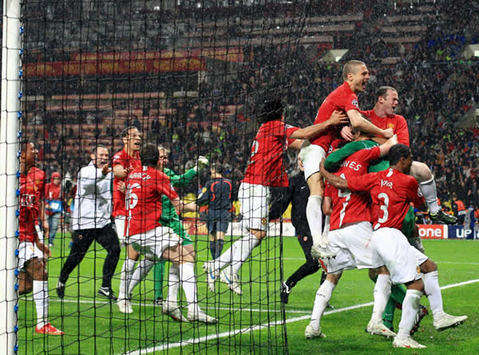 Arsenal and Chelsea both closed the gap on United, who could point to their Champions League quest as a reason for being less dominant domestically. United completed a League and Champions League double though, lifting the European crown after a dramatic shoot-out against Chelsea in Moscow.

The following summer saw general tweaking to Ferguson's squad, with the Da Silva twins signed from Brazilian club Fluminense. But United were merely keeping their powder dry for deadline day and an audacious £30m swoop for Tottenham striker Dimitar Berbatov.

Wenger added Aaron Ramsey and Samir Nasri to his options, but farewells for Jens Lehmann and Gilberto Silva brought the curtain down on the Invincible era.


So near, and yet so far away so soon. From closing to within four points of the champions, Arsenal plummeted back to fourth and 18 points behind as Liverpool mounted the best challenge to United in the league.

Ferguson's side were denied a Champions League double by Barcelona in the final in Rome, Samuel Eto'o and Lionel Messi providing the goals, and a certain Thierry Henry playing his part for the Catalan club.

But now there was a new force for both United and Arsenal to consider. Manchester City were beginning to become United's noisy neighbours, and they grabbed Carlos Tevez from across the city while Kolo Toure and Emmanuel Adebayor became the first to trade north London for Eastlands.

United were moving in different financial circles though, Cristiano Ronaldo sold for a world record £80m to Real Madrid. The signings were modest, Antonio Valencia from Wigan underwhelming supporters who wanted to see the Ronaldo money reinvested, while Michael Owen arrived on a free, pay-as-you-play transfer.


Wenger's side were top of the table as late as March, but just two wins in their last seven matches saw them tumble from contention.

Manchester United and Chelsea juked it out until the last day of the season, when Carlo Ancelotti's men romped to an 8-0 home victory over Wigan to become the first team to score 100 goals in a Premier League season.

United wasted £7m on Bebe in the transfer market, but struck gold with Javier Hernandez and Chris Smalling. Meanwhile Arsenal grabbed Marouane Chamakh from Bordeaux on a free transfer, plus defenders Laurent Koscielny and Sebastien Squillaci.

By the time the 2010-11 season ended, it was hard to believe that Arsenal had been genuine contenders on four fronts in February, and beaten Barcelona in the Champions League last 16 first leg at the Emirates.

The collapse began with a late nightmare in the League Cup final gifting Birmingham silverware and prolonging the Gunners own six-year trophy drought.

They exited the FA Cup at Old Trafford, and their late season league form was the stuff of relegation strugglers rather than title contenders.

United returned to the Champions League final to again be outclassed by Barcelona, but they cruised to the title, their 19th English league success.

Never one to rest on his laurels, Ferguson lavished funds on Ashley Young and Phil Jones, while Wenger has so far only bought Gervinho and Carl Jenkinson, despite Fabregas, Nasri and Gael Clichy all leaving.

Injuries and suspensions mean it will be a shell of a team that Arsenal field at Old Trafford on Sunday - a far cry from a time where they stood imperious over United and all of English football.