By Sam Bisby
England No.1 wins prize for the first time after keeping 17 clean sheets, beating off competition from the likes of Petr Cech and Edwin van der Sar with one game to go

Manchester City goalkeeper Joe Hart has been awarded the Barclays Golden Glove, after keeping the most clean sheets throughout the current Barclays Premier League season.

The England international was presented the award on Friday, after his latest stint in front of goal during the 3-0 victory over Stoke on Tuesday totalled his tally to two more than that of Chelsea’s Petr Cech, with just one game left.

Hart began the season with three clean sheets in the first five games for City and followed up such domineering performances by keeping the likes of Arsenal, Manchester United and Chelsea at bay.

The 24-year-old crucially kept two clean sheets against fourth place rivals Tottenham, helping the Citizens to qualify for the Champions League for the first time in their history. 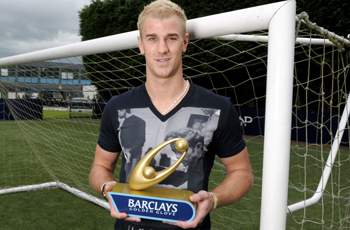 It is the first time Hart has received the award and he kept off such competition as Cech (15), Pepe Reina and Edwin van der Sar (both on 14).