Former Arsenal midfielder Paul Merson believes Gunners captain Cesc Fabregas could be on his way out of the Emirates this summer and has urged Arsene Wenger to use the money from his sale to strengthen his faltering squad.

MORE...
Fabregas was heavily linked with a move to childhood club Barcelona last summer and despite two bids from the Catalan giants for the Spanish international Wenger held firm and held onto his captain.

Goal.com revealed last month the Gunners are willing to let their midfield maestro leave if Barcelona match their £45 million valuation and Merson, who played 327 times for the Gunners and scored 99 goals for the club, thinks it could be the right time for Fabregas to leave.

“He will probably end up going in the summer," he told Goal.com.

“He is not the same player of the last few seasons and he has not reached the same heights.

“Arsene Wenger was right to keep hold of him last summer because he has been a phenomenal player over the years.

“But it hasn’t really worked out due to the injuries he has picked up and if Arsenal can get good money for him he will go.” 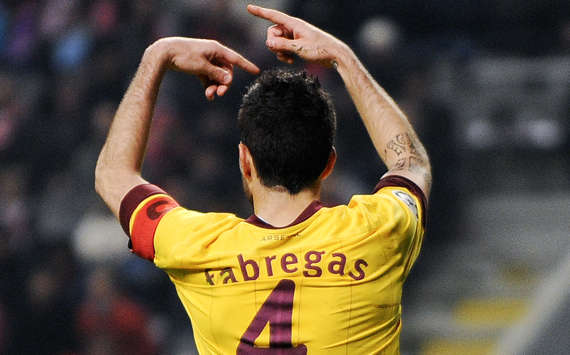 Fabregas, 23, has spent eight seasons in north London after leaving Barcelona at 16 and was made captain of the club in 2008.

He has been a pivotal part of Wenger’s philosophy at the Emirates but Merson believes the money generated from any sale of the captain could be used to strengthen the squad with "three or four" players.

He added: “With the money they get in from any possible sale of Fabregas they could get in three or four top quality players.

“It is no secret Arsenal need strengthening at centre-half and in the middle of the park.

“Someone like Scott Parker, who has carried West Ham on his shoulders, and Gary Cahill would fit the bill.”

Arsenal’s season has crumbled at the most important stage of the campaign once again. In February the Gunners were chasing the quadruple but after losing to Birmingham in the Carling Cup final they crashed out of the Champions League to Barcelona and were dumped out of the FA Cup by Manchester United.

And after Wednesday's thrilling 3-3 draw with north London rivals Tottenham their title hopes hang by a thread.

Merson, 43, insists when it comes to the crunch Arsenal do not have any leaders.

He said: “When you get to the closing stages of the season it becomes so difficult.

“There is a different pressure on the side and if you don’t know how to win and close games out it’s tough.

“If you look at the last couple of games against Liverpool and Tottenham the problem is there for everyone to see.

“There are no talkers out on the field and no driving force who everyone follows.”

But the former England international, who won six major honours in 11 seasons at Arsenal, wants Wenger to sign players who are tried and trusted in the Premiership and ready to win.

He added: “When you bring foreign players in it takes them time to settle into the game. It can take them up to six months to settle in but at Arsenal they need results immediately.

“That’s why players like Parker and Cahill, who have Premier League experience, would be ideal.”

The former Middlesbrough, Aston Villa and Portsmouth star believes the club’s majority shareholder Stan Kroenke will back Arsene Wenger despite the club’s lack of silverware.

He said: “An owner’s main aim is not to lose money.

“Everyone likes to win trophies but even if there is no silverware at the end of the season and the club is making money then the owner is happy.

“Wenger is an owner’s dream. He does not waste any money and at the end of the day that is the only thing owners are concerned with.”