Tottenham are in pole position to land Steven Pienaar in January - even though Everton have agreed a £3 million fee for him to join Chelsea.

MORE...
The South African midfielder has so far failed to agree personal terms with Chelsea and wants to push through a move to Spurs, who he had already agreed to join in the summer on a free transfer.

Tottenham chairman Daniel Levy is locked in fierce negotiations with Everton and had been refusing to increase his £2m offer for a player whose contract expires at the end of the season. However, Goal.com UK understands that a compromise fee of £2.5m has now been reached and Pienaar is expected to sign a four-year contract at White Hart Lane.

The former Ajax man edged closer to his exit from Goodison Park on Sunday when he missed the derby clash against Liverpool because he did not feel he was in the right frame of mind to play.

The stance being taken by the London club is backed by Pienaar and his representatives as money paid to Everton for the transfer will be deducted from previously agreed signing on fees and agents' fees for a Bosman free transfer in the summer. 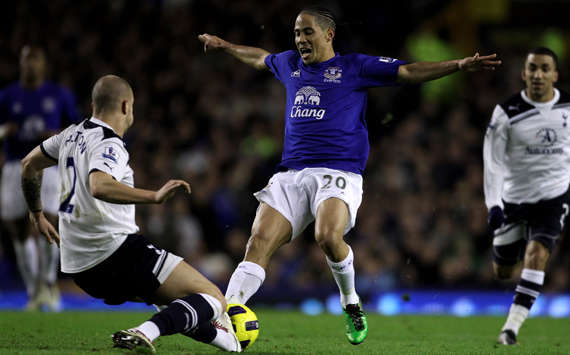 “Spurs are really turning the screw on the transfer fee and Everton are furious about it,” a source close to the deal told Goal.com UK. “Chelsea's bid means Everton are holding out for £3m and a stand-off has developed – but everyone involved expects him to go to Spurs.”

As Goal.com UK revealed last month, Tottenham were extremely confident of signing Pienaar either in January or at the end of the season, but they were forced into action on Friday after  reports claimed Pienaar was in talks with two other clubs.

Everton manager David Moyes revealed on Sunday that Chelsea have been given permission to discuss personal terms with the 28-year-old as manager Carlo Ancelotti looks to freshen up his squad following poor recent form.

Moyes is keen to recoup some money on Pienaar – signed from Borussia Dortmund for £2m in 2008 after an initial loan spell – to re-invest in attacking options for his side. Pienaar is expected to train with Everton on Monday but his team-mates are sure he has played his final game for the club.

Spurs boss Harry Redknapp believes Pienaar will add creativity and energy to his squad as he tries to bolster his midfield options and ensure a second consecutive top four finish.

Pienaar's arrival could pave the way for Croatian midfielder Niko Kranjcar to leave Tottenham this month, with clubs from Spain and Germany showing interest in the unhappy star.

Redknapp has made a world class striker his priority for the transfer window but talks with Ajax over a move for Luis Suarez have stumbled over the Dutch club's £20m asking price.

The Spurs manager could be forced into action as Liverpool look set to step up their interest in the Uruguayan striker this week.

Tottenham were also interested in Newcastle star Andy Carroll but have ruled out a January move and will renew their efforts at the end of the season.