Tottenham are already eyeing a potential permanent move for David Beckham if he completes a loan switch to White Hart Lane in January, Goal.com UK can reveal.

But the England superstar is still some way from completing a two-month loan move to Spurs from Los Angeles Galaxy, not least because he is worried about a lack of playing opportunities.

Tottenham manager Harry Redknapp believes the benefits of having Beckham in the squad will outweigh the negatives of the media circus that surrounds the most famous footballer on the planet.

MORE FROM GOAL.COM UK...
Chairman Daniel Levy is also keen to push through a move for the former England captain and will sanction a salary package worth around £120,000-a-week for the former Manchester United midfielder, who could make an emotional debut against his former club on January 16.

And Spurs are already considering the benefits of a permanent swoop for the 35-year-old, whose contract with LA Galaxy expires at the end of the MLS season in November. Redknapp is a huge admirer of his professionalism and feels his experience and winning mentality could make a difference to his squad as Spurs look to compete for major silverware. 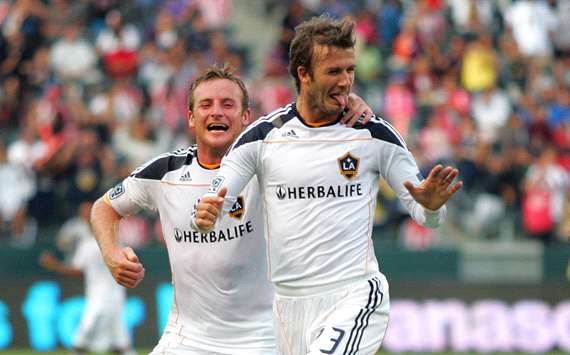 Back for good? | Beckham is set to return to England - and Spurs could make it permanent

Beckham has been the driving force behind the potential move as he is desperate to play in England and force his way back into the national team reckoning before the new MLS season starts in March.

He has attracted interested from no fewer than six Premier League sides but Tottenham emerged as his preferred option after he had lunch with Jamie Redknapp – son of Spurs boss Harry – at Harrods 10 days ago. Frank Lampard was also present but it is believed Chelsea have never shown a serious interest in the former Real Madrid man and that Beckham used the occasion to express his interest in playing for Tottenham.

But first Spurs chiefs have to overcome the significant obstacles of reaching an agreement with the LA Galaxy, convincing Beckham that he will get the playing time he wants and meeting the demands of his representatives, particularly over image rights.

A White Hart Lane insider last night told Goal.com UK that "significant work" needs to be done in the coming days to complete a deal that has been "prematurely overhyped" after Harry Redknapp's comments to the media.

Tottenham are ready to pay a loan fee of around £500,000 for the deal and negotiations should be smoothed by the fact that the LA Galaxy are owned by entertainment giant AEG, who are Spurs' partners in their bid to take over the Olympic Stadium after London 2012.

There have been some suggestions that Beckham will be used to front the Olympic Stadium bid but Tottenham are determined that the transfer should go through purely for football reasons as they step up their bid to mount a challenge for the Premier League title this season.

Beckham had previously insisted that he would only return to England to play for Manchester United but his stance has softened as he looks to maintain his fitness ahead of the new MLS season and, more pertinently, win back his England place.

He still believes he is capable of playing for the national side and wants to prove it to England boss Fabio Capello by performing in the Premier League as he did in previous loan stints at Italian giants AC Milan.

"Spurs are one of many clubs interested - but we have not yet had detailed talks," said a representative for Beckham, according to BBC Sport.

"At the moment we are waiting on the decision of LA Galaxy with regards to a loan move. The loan would be a short one until the start of the MLS season.

"David would then return and play a full season with the Galaxy.

"The loan is part of David's desire to keep fit and make himself available for England again."

Tottenham face Milan in the first round of the knockout stages in the Champions League, meaning Beckham could come up against two of his former clubs during his time in north London.

Spurs believe Beckham's vast experience – he has won league titles in Spain and England, as well as the Champions League – will be a huge asset during a crucial period in the season during which key fixtures come thick and fast.

Beckham has previously indicated that, if he looks after his body, he can play until he reaches the age of 40. He could end his career where he started as an academy player after growing up in Chingford in east London, which is close to Tottenham and their Chigwell training base.