West Ham will make a January move for Liverpool flop Christian Poulsen if Avram Grant hangs on to his job at Upton Park, Goal.com UK can reveal.

MORE...
The Hammers have made the Danish midfielder a target as they look to toughen up a squad that sits rock bottom in the Premier League at the halfway point of the season.

Goal.com UK revealed in November that Liverpool are prepared to sell Poulsen in the January transfer window after he failure to make an impact at Anfield following his £4.5 million summer switch from Italian giants Juventus.

West Ham believe they will be able to sign Poulsen for a cut-price £3m as they desperately seek to avoid relegation. The 30-year-old has found himself out of favour under Reds manager Roy Hodgson after falling behind Raul Meireles and Lucas in the pecking order.

But the deal hinges on the future of Hammers boss Grant, who has to win one of the Londoners' next two games in order to save his job. 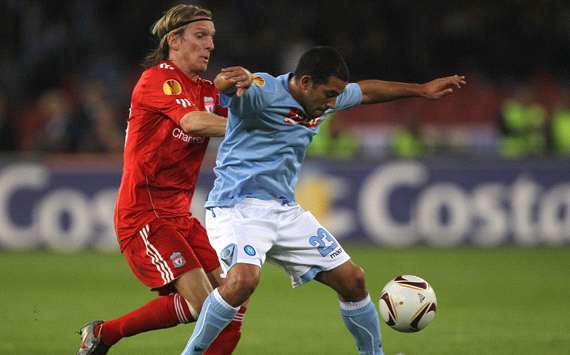 Disappointing Dane | Poulsen has been off the pace for Liverpool

West Ham co-owners David Gold and David Sullivan have lined up Sam Allardyce following his dismissal from Blackburn last week and it is uncertain whether he would press ahead with the Israeli's plans to swoop for Poulsen.

Liverpool would like to line up a replacement before allowing Poulsen to leave Merseyside because of their small squad but Goal.com UK understands West Ham would not even countenance a deal involving Scott Parker going the other way.

Parker is seen as absolutely crucial to West Ham's chances of avoiding relegation this season and Poulsen has been identified as a player who can support the former Newcastle and Chelsea man, rather than replace him.

Grant is also lining up a move for Aston Villa midfielder Steve Sidwell as he desperately tries to add a more combative edge to the spine of his side.

Poulsen was widely criticised earlier in the season for his poor performances in Liverpool's dreadful start to the season as he failed to live up to his billing as a replacement for Javier Mascherano following the Argentine's £21m summer switch to Barcelona.

The Swiss midfielder is likely to leave Upton Park in the January transfer window and former England boss Steve McClaren is ready to offer him a lifeline.

But Behrami would prefer a return to Italian football – he was signed from Lazio for £5m in July 2008 – with Roma and Juventus heavily linked in the past.