Moroccan must pick up the slack, but is he suited to the task?
DEBATE
By John Elmes

When Arsene Wenger saw Theo Walcott being carried off on a stretcher in Basel on Tuesday, a few more lines would have appeared etched into the 60-year-old's brow.

By the time it was confirmed the winger would be out for six weeks with an ankle injury, he was probably resembling an 80-year-old.

For some managers, the loss of one attacker, albeit one as important to Arsenal as Walcott, would be an inconvenience. For Wenger it represents the brink of disaster. After all, the Gunners’ boss was still reeling from the news that Robin van Persie would be out for six weeks after an injury in the Premier League match against Blackburn.

These two recent casualties join Nicklas Bendtner and Samir Nasri, who both have long-term injuries. Bendtner has been out since the World Cup and is not likely to return to first team action until November.  The picture is slightly rosier for Nasri, who might return for this weekend’s fixture. But this is not definite, and would Wenger even risk starting a player who hasn’t played since the opening day of the season?

This situation leaves Marouane Chamakh to carry the load. The 26-year-old will have to score the goals Walcott has been and Van Persie is expected to. A lot of responsibility for the man who only came to the Emirates in the summer.

The Moroccan has already scored for Arsenal this season - in the rout of Blackpool - but he only scored 10 goals in Ligue 1 last season for Bordeaux in 38 appearances, and with only Andrey Arshavin as the other attacking outlet, he will surely have to up his scoring rate.

Arsenal fans will be aware of the precarious position they’re in with regards to injuries, but Chamakh does have the ability to step up to the plate. He has all the skills you would expect from an Arsenal attacker – pace, silky footwork, an excellent touch, good movement and a bullet shot, but he has another dimension to his repertoire; his heading ability.

For a slight player, with not much bulk despite his height, he has immense strength, gets himself across central defenders, some much bigger than himself, and scores plenty of headed chances. His goal against Blackpool is a prime example of this, and it is a feature of an Arsenal centre forward fans will not have been too familiar with in recent years.

His ability to leap earlier than defenders and hang above them was beautifully demonstrated with a crashing header in the Champions League tie with Lyon last season. If he resembles any other Premier League striker for this trait, it is Fernando Torres. 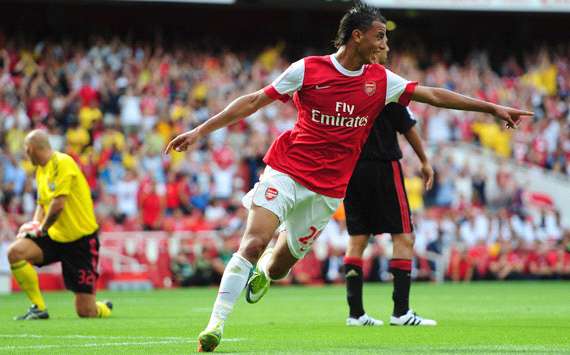 Stand and deliver | Chamakh finds himself with much responsibility early on

That said, his record of a goal every four and a bit games in the league for Bordeaux (56 in 230 appearances) is a concern and it again raises the question of Arsene Wenger’s transfer policy. After Bendtner’s injury it would have been wise to invest in another striker. Wenger will point to Chamakh in response, but with Van Persie’s fitness frailty in recent seasons and Eduardo’s transfer to Shakhtar Donetsk, Wenger was gambling and already he may have lost.

It is common knowledge that Wenger puts faith in his youth. He said recently: "We are short on the striker front when you have two strikers out but [Carlos] Vela is in good shape and we have Jay Emmanuel Thomas who has made some big improvements.

"We have Benik Afobe, a young player who can play striker and has shown big quality, so we still have some reserves."

Wenger is not one for doubting himself, but if Chamakh fails to fire, plenty of others will do.