The Red Devils are set to press ahead with an £8 million swoop for the Netherlands international midfielder, after Arturo Vidal committed his future to Juventus
EXCLUSIVE
By David Craddock

United are set to confirm the signing of Ajax's Daley Blind on Monday after agreeing terms on a £13.8 million deal with the Dutch club.

But the Red Devils could still bring in the 29-year-old AC Milan man in an £8m deal, in a bid to further bolster their midfield options.

Talks between Woodward and De Jong's camp are understood to have progressed over the following weeks, with the player keen to link up with Louis van Gaal, who coached the former Manchester City midfielder while in charge of Netherlands. 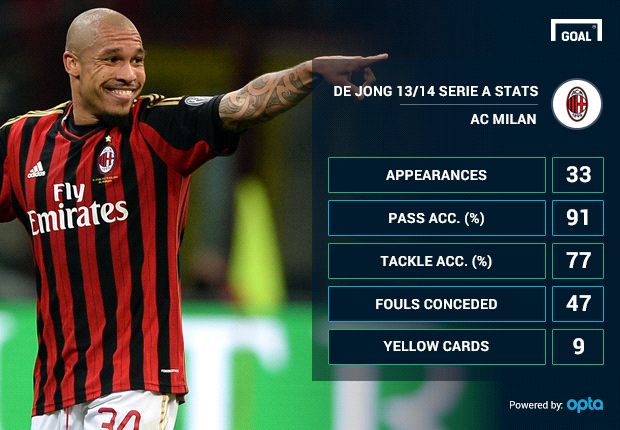 United had been hopeful of luring Juventus midfielder Arturo Vidal away from Turin this summer after a series of strong displays with Chile at the World Cup.

But with Vidal now set to stay in Serie A, the Red Devils have turned their attention back to De Jong ahead of the transfer deadline on Monday night.

United have been busy during the final days of the transfer window, wrapping up a £57.9m move for Angel Di Maria and completing a complicated deal to sign Marcos Rojo, though the defender is still awaiting a work permit.

Shinji Kagawa has now left the club and returned to Borussia Dortmund on a four-year deal, with Danny Welbeck and Javier Hernandez also set to follow.

Goal understands that Welbeck is close to a season-long loan move to Tottenham, while Hernandez is on the verge of sealing a temporary switch to Real Madrid.