Arsenal have redoubled their efforts to sign Morgan Schneiderlin from Southampton in a bid to beat off stiff competition for the midfielder's signature from London rivals Tottenham, Goal can reveal.

The France international is now regarded as this summer's No.1 target at both clubs, with the lure of playing under former Saints boss Mauricio Pochettino at Spurs proving a strong temptation for the 24-year-old.

However, Arsenal have outlined a salary package through intermediaries which, combined with the possibility of Champions League football and greater trophy-winning potential, could prove decisive.

Arsene Wenger has stepped up his interest after, as revealed by Goal, the Gunners opened preliminary talks with the Saints over a move for Schneiderlin.

The Saints are playing hardball over any deal for the Frenchman following the departures of Luke Shaw, Adam Lallana and Rickie Lambert this summer, as well as Pochettino. They rate the midfielder at £18m, although the north London rivals value the 24-year-old at the £15m mark. 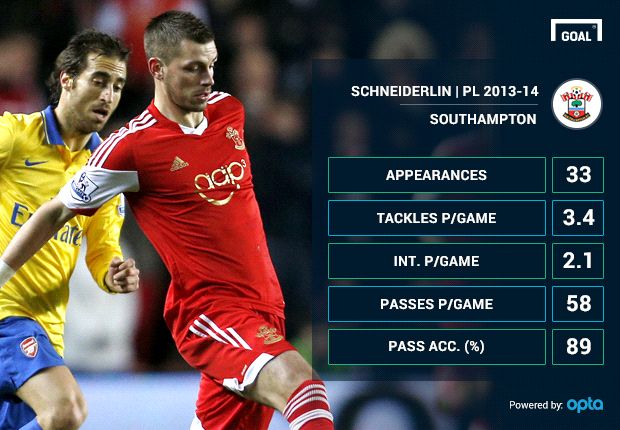 Arsenal are now concentrating their efforts on a deal for Schneiderlin, although they also maintain an interest in Bayer Leverkusen's Lars Bender. The club are no longer pursuing Real Madrid's Sami Khedira due to his demans for a £200,000-a-week basic salary.

Meanwhile, Spurs are exploring the possibility of selling a central midfielder in the squad to free up space for Schneiderlin and the Frenchman clearly holds the club - and Pochettino - in high regard, telling Goal in June: "With the quality Tottenham have, Mauricio Pochettino will get the best out of each player.

"He came in and made Southampton play and now Tottenham have a great future.

However, encouragingly for Arsenal, the player has also spoken of his desire to play at the highest level, saying: "Everyone has ambitions, everyone has his own future in his hands, so we'll see. Every player wants to play on big occasions."

Schneiderlin has been closely trailed by the Gunners over the last two seasons since Southampton were promoted to the Premier League.

He has been a key performer for the Saints following a move from Strasbourg in 2008 and was drafted into the France squad for the World Cup as a late replacement for the injured Clement Grenier.

Goal revealed in June that Arsenal were weighing up a double swoop for Schneiderlin and his team-mate Dejan Lovren but the Croatian is headed for Liverpool and Wenger has turned his attention to new centre-back targets.