By Alex Dimond
Presenting the one man thankful for England's failings in South Africa...
At the start of the decade, the police’s effective ‘Could You?’ advertising campaign — where cultural heroes such as boxer Lennox Lewis and Falklands veteran Simon Weston admitted they doubted their ability to cope with the particular challenges of the job — encouraged hundreds of thousands of ordinary people to enroll with the force.

At the end of the same decade, a reserved, otherwise unremarkable Yorkshire copper is proving again that there is nothing ordinary about his ilk — as on Sunday Howard Webb will become the first person ever to referee the Champions League final and World Cup final in the same year.

The former bobby on the beat from Rotherham — a town that could be forgiven for thinking it would ever send anyone to the World Cup other than as a spectator — will have the eyes of the world watching him on Sunday (albeit in much the same way as the eyes of the audience are on Rob Schneider in an Adam Sandler film).

But, having come up against the twin imposters of triumph and adversity in the past year alone, and seemed to treat them pretty much just the same, Webb should be well placed to cope with the extra attention and scrutiny that comes with such a showpiece responsibility.

It hasn’t all been plain sailing for the former sergeant – someone who rather interestingly (and also perhaps slightly worryingly) lists ‘family’ as his sole ‘hobby’ on his official FIFA profile. Turning to refereeing after it became clear he was never quite going to make it at the highest level (despite himself believing he was an 'okay player'), Webb began in the amateur leagues of Yorkshire before gradually working his way into the big time.

He started in the top flight in 2000, although since then he has made his fair share of mistakes. But, like German striker Miroslav Klose, it seems Webb has found the happy knack of getting himself into prime form just in time for the World Cup, despite a somewhat erratic recent club campaign.

You will obey | Authority is Webb's calling card, but there is more to his officiating style

A veteran of 48 European clashes and over 300 Premier League games, Webb has enviable experience of the big occasions. But until the very end of the current campaign he had not exactly presented the greatest body of work this term.

While the 38-year-old might eventually even have the rare praise from a certain Jose Mourinho (“he is a man who seems to get the big decisions right”, the Portuguese once admitted) chiselled on his grave stone, over the past year the chorus of criticism has often been far louder. Of course, as with every line of work where chants questioning how you spend your time alone is an occupational hazard, such criticism is almost par for the course.

But Webb got tangled up in greater problems in the game between Birmingham City and Wolverhampton Wanderers in early 2009, where his touch managed to lay on the assist for Sam Vokes to score the decisive second goal of the game.

Webb later described the game as his "lowest point" in the game, although fans of Poland might dispute that assertion after he gave hosts Austria an injury time penalty in their Euro 2008 group stage clash.

While his week-in, week-out performances didn't always stand up to scrutiny in the helter-skelter games of the Premier League, in Europe the policeman — who is currently on a five-year sabbatical from the force to make the most of his refereeing career — seemed to gain friends and influence within UEFA.

Coming off the back of a solid showing in last summer's Confederations Cup, where he dealt with some last-minute drama in the game between Egypt and Brazil (where, after a delay, he eventually — correctly — gave a penalty against the African country for a handball), Webb seemed to be earmarked for the major occasions, living up to his moniker as 'Pierluigi Collina lite'. Perhaps bald referees are just inherently better.

His no-nonsense approach, taking command of the entire pitch and accepting minimal insubordination from players, proved effective in the games he took charge, and the lack of mistakes ultimately saw him awarded the Champions League final between Inter and Bayern Munich.

In the game at the Santiago Bernabeu the Englishman put on a solid display, keeping himself out of the spotlight and ensuring he was never pressured into incorrect decisions as Inter ended their long wait to be crowned Europe's best. Perhaps most significantly, his presence seemed to ensure that he managed the delicate balancing act of keeping all the players in check without spoiling the spectacle, something that no doubt would have been noted by the FIFA bigwigs.

Such a display gave him good momentum going to South Africa — if, like players, referees go through patches of good and bad form — where Webb has been understated but efficient. In his three games (Spain v Switzerland, Italy v Slovakia and Brazil v Chile) to date Webb and his team of assistants have been at the centre of no major controversies, while simultaneously making a number of judgment calls that replays later proved to be correct.

Not that either country involved in the game at Soccer City will necessarily be happy with Webb's appointment. Like the Poles, it seems unlikely Spain will be too happy to see him take the whistle on Sunday — he oversaw La Furia Roja’s opening defeat to Switzerland, after all, after which a leading newspaper complained 'Howard Webb was against Spain in all the important decisions’.

Not that the Netherlands will necessarily be any happier to see the Englishman. After all, the last time an Englishman presided over the final, in 1974, was another final the Dutch took part in — and lost, despite Jack Taylor giving them a first-minute penalty in what must be one of the braver decisions in the game’s illustrious past. 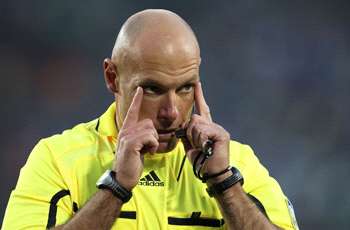 Webb might be hoping not to be forced to make such a call, but if the need arises he seems prepared to do so. Most importantly, however, just like the spectators at home he will hope it is not him but one, or more, of the 22 players on the pitch that end up being the centre of attention.

"The World Cup is a magnificent event and I’m looking forward to being part of it,” Webb said before the tournament.

"Obviously you are concentrating on keeping the game under control and getting the big decisions right, but sometimes you see an outstanding pass or tackle and you have to congratulate the player who has pulled it off.”

On Sunday, Webb will get his chance to achieve those twin aims.