Goal.com looks into the crystal ball...
10. The real reason for Cacau missing the game is revealed when he is spotted on the big screen with two bikini-clad babes and his face painted while cheering on Brazil against Holland.

9. Before the match Lionel Messi discovers the reason why he has yet to score in this World Cup. Lukas Podolski secretly switched boots before the start of the tournament, taking Messi's footwear, which brought him nearly 50 goals during the domestic season for Barcelona, and replacing them with the ones he had been sporting for Koeln. Poldi then fails to match his 2009-10 goalscoring feats, falling short of the three he managed in the Bundesliga. 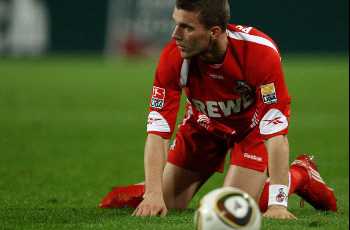 Golden touch - or not | Podolski

8. Martin Demichelis maintains his fine record of creating a goalscoring chance in every match of the 2010 World Cup. The Bayern Munich defender plays an inch-perfect through-ball for his team-mate, Thomas Mueller, to allow Germany to take the lead.


7. As in 1990, Diego Maradona can be seen mouthing something during the recital of the national anthems. It is not 'hijo de puta' this time around, as it was 20 years ago, but 'stop blowing those damned vuvuzelas'.

6. In a strategic change that is not too dissimilar to bringing on a specialist penalty taker at the end of extra-time in anticipation of spot-kicks, Diego Maradona and Joachim Loew send on expert scrappers Nicolas Burdisso and Torsten Frings respectively for the inevitable fight after the final whistle. 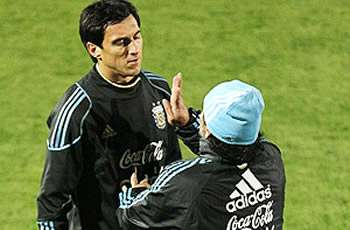 'Hit him here, on the nose' | Diego gives instructions

5. The 'Nike Curse' strikes again. Reminiscent of 1990, when they sabotaged the Brazilian water bottles, Argentina replace all of Germany's Adidas kit with Nike equivalent. Instead of 'writing the future', Germany only manage to write an itinerary for returning home early.

4. Lionel Messi continues to recreate some of Diego Maradona's finest moments. In a stunningly accurate re-enactment of el Diez's 1986 semi-final goal against Belgium, Messi dribbles the ball past a host of German defenders before angling a shot towards goal. However, it hits Gonzalo Higuain on the backside before reaching the line and he claims his fifth goal of the tournament. Leo remains frustrated.


3. In a cunning ploy from Brazil to ensure they avoid their South American rivals, Pele conducts a staged press conference before the match predicting an easy win for Argentina. Maradona's side are then powerless against the universal 'Edson Arantes do Nascimento' law, whereby if the Brazilian legend makes a prediction, the opposite shall occur. Germany win 5-0. 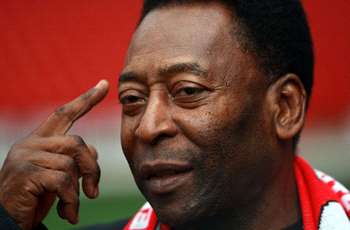 2. Maradona's promise to get naked if Argentina win the tournament comes to fruition two matches early as the portly 49-year-old strips off in a frenzy when Martin Palermo scores a last-minute winner. In doing so, he keeps his goal of becoming a World Cup winning captain and manager alive, but succeeds where no coach has succeeded before - bare-arsed bearhugs on the sidelines for each of his players. 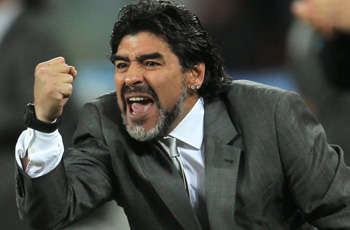 
1. Going one step further than simply refusing to put in any effort between World Cups for his club side, Miroslav Klose returns to Germany after Argentina eliminate the Nationalmannschaft to be cryogenically frozen until 2014, when he can again attempt to overtake Ronaldo's all-time scoring record. 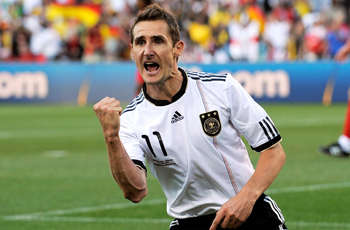 Klose encounters | Miro will be back in four years...