By John Duerden In South Africa
A great afternoon for team and coach...

The clenched fist said it all. With two of the four injury-time minutes played, Japan goalkeeper Eiji Kawashima allowed himself a small personal salute after diving low to somehow claw a close-range effort off the line.

It would have been disallowed anyway but even so, the Kawasaki Frontale man, who only elbowed aside Seigo Narazaki for the spot between the sticks during the World Cup build-up, summed up the grit and determination showed by the Asian team as they defeated Cameroon 1-0 on Monday afternoon.

At last! A first win on foreign soil

In the South African city of Bloemfontein, known as the City of Roses, there wasn’t much pretty football on display but nobody in the Land of the Rising Sun will care. The record books will show that Keisuke Honda’s 39th minute goal was enough to give Japan the three points and condemn Cameroon to a first ever opening game defeat at the World Cup.

This was a Japan team, one with Shunsuke Nakamura on the bench, that ground out a win in a fashion for which the team is not known. Japan are supposed to play easy-on-the-eye football that goes nowhere. In recent times, it hasn’t even been that pleasant to watch as the team struggled in friendly games. Japanese journalists, convinced of a winless early exit, will perhaps be eating a little piece of humble pie tonight in the Free State.

The nights are cold here but it was Cameroon that struggled to warm to their task in a forgettable first half though the selection of coach Paul Le Guen caused a few furrowed brows when he stuck Samuel Eto’o on the wing and Alex Song on the bench. Okada’s decision to leave out Nakamura was a brave one despite the fact that the former Espanyol and Celtic star is not the player he was.

Honda made the difference 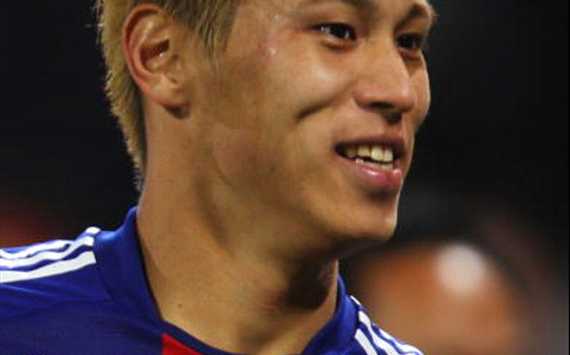 Motoring on | Honda was irrepressible in the Japanese engine room

It didn’t matter and results tend to vindicate, or not, team selections. The industrious Daisuke Matsui did much good for the Samurai Blue and anyway, they had Honda. His cool finish at the far post when two Cameroon defenders tried and failed to reach the same ball, what just what Japan needed. There were a number of hairy moment after the break but not too many.

The players fought hard to ensure that was the case. In the back of their minds would have been the capitulation to Australia four years earlier. They were determined not to let that happen. With six minutes remaining however, at about the same point in the game as Tim Cahill equalised in Kaiserslautern, a fierce shot from Stéphane Mbia , the best of the tournament so far, though that is not saying much, bounced back from the bar and Japan breathed again. As well as oxygen, belief began to flow through their bodies.

Japan fought until the end 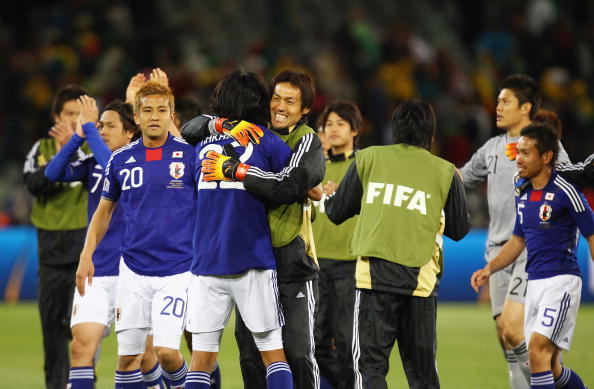 Smells like team spirit | The Japanese players were unified throughout

Being pushed on the backfoot by a team ranked 19 in the world and crowned African champions four times was no surprise but the way Japan reacted was in contrast to 2010 form. The defence, marshaled well by captain Yuji Nakazawa who belied reports that he was a fading force at the back, held firm. The midfield may have been pushed further and further back but the team kept its shape and stayed organised. It was a real fighting performance.

There is still some way to go. Japan will have to improve against the Netherlands and Denmark if that coveted place in the second round is to be had. For now though, it is time to celebrate. For this was also a victory of an Asian team over African opposition in Africa. It was a second Asian win before the World Cup is a week old when 2006 provided just one win in the whole tournament.

Most of all though it was a sign that this Japan team has more backbone and steel than most gave it credit for and it means that Group E is going to be very interesting indeed and for that alone, the much-maligned Takeshi Okada deserves credit.