Fulham skipper could return to haunt the manager who cast him out...
By Neil Jones | Liverpool Correspondent

The very idea of Liverpool taking on Fulham in a European final is one that will take plenty of getting used to, but fans of both clubs will get a chance to let their imaginations run wild as Rafael Benítez and Roy Hodgson go head to head in the Premier League at Anfield this weekend.

And whilst proverbial 'dress rehearsals' often tell us little about bigger clashes to come, for one player there will be added sentiment should the two sides meet in Hamburg on May 12th. Expect Fulham skipper Danny Murphy to be on a mission when he faces his former club.

One of Benitez's first acts as Liverpool manager was to allow the popular Murphy, a player with over 150 appearances for the Reds, to join Charlton Athletic in a £2.5 million deal. It may have seemed a decision dripping with logic at the time - Murphy was 28 and Liverpool were strapped of transfer funds having splurged £14m on Djibril Cisse - but it set the tone for a lot of what was to follow under the Spaniard. Sentiment has no place at Benitez's Liverpool.

Both Steven Gerrard and Jamie Carragher have spoken at length at their dismay in seeing Murphy, a close friend, depart so suddenly against his will. And whilst Xabi Alonso and Luis Garcia would work wonders at filling the void left by the likes of Murphy, as well as fellow England internationals Emile Heskey and Michael Owen (whom Benitez feared were forming a worrying clique), there was a lingering sense that, in letting Murphy go, Benitez had made a hasty decision.

The former Crewe Alexandra trainee netted more than 40 times for the Reds, despite often being used out of position on the wing - he and Gerrard would nickname it the 'graveyard shift' - and become renowned for his propensity for scoring big goals. His last major contribution for the club was the winning goal - a typically nerveless penalty - at Old Trafford.

Yet whilst many supporters never took to him - one fan remarked recently that he was 'the Lucas Leiva of his day' - it is fair to say that Murphy's performances since he left Anfield have offered a perfect riposte to his critics. His recent barbed comments about Benitez's regime may have been born out of bitterness, but make no mistake, the 33-year-old would improve Liverpool's squad right now. At No.420 overall in the Castrol Rankings, Murphy is notably ahead of Maxi Rodriguez (No.445), Alberto Aquilani (No.1834) and Albert Riera (No.1020). 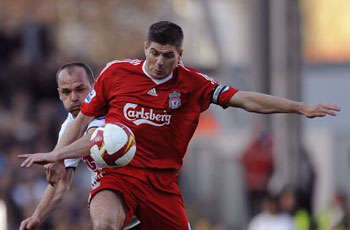 Not that his Charlton career - or even his subsequent stint at Tottenham - did much to prove this point. It took the best part of two years for him to regain his form after leaving Liverpool, but at Fulham he found a club tailored to his needs - and perhaps a level more suited to his at-times-ponderous style.

Deployed in his favoured central role, Murphy has quietly grown into one of the league's most influential midfielders. He is now club captain, and his big-game prowess remains; it was his late header at Portsmouth which kept Fulham in the Premier League in May 2008.

Hodgson has worked miracles at Craven Cottage; rejuvenating a side which looked destined for relegation, and creating one which is within 180 minutes of a Europa League final. It has been thanks to the likes of Murphy, as well as the excellent Clint Dempsey, Brede Hangeland and Bobby Zamora, that the Cottagers can flourish. Murphy has struck 20 times in three seasons for the Londoners already - and his football brain makes him the key component in an ultra-efficient midfield unit.

When Liverpool, depleted by the departure of Xabo Alonso last summer, were left hurriedly searching for a tempo-setting midfield player with an eye for a pass, they spent £17m on Alberto Aquilani. The Italian has enjoyed a miserable, injury-hit debut season on Merseyside.

Fulham, meanwhile, just sat and smiled. They already had the perfect player in their ranks, of course.