15:53 26/06/2016
Getty
Didier Deschamps' men were shocked to fall behind in the second minute but Les Bleus rallied, as a double from the Atletico Madrid striker proved decisive on Sunday

Antoine Griezmann scored twice as France overcame an early setback to beat 10-man Republic of Ireland 2-1 and reach the quarter-finals of Euro 2016 on home soil.

Martin O'Neill's side made a remarkable start at the Stade de Lyon, taking the lead on two minutes after Paul Pogba fouled Shane Long in the box and Robbie Brady - the goalscoring hero in the decisive Group E win over Italy - netted the subsequent penalty.

But the hosts stirred into life and netted twice in three minutes after the break as Griezmann planted a 58th-minute header beyond Darren Randolph before coolly slotting a second.

It was a cruel double blow for the Irish, whose task was made near-impossible when Shane Duffy saw red for a foul on the irrepressible Griezmann as he raced through on goal.

France pushed to inflict further damage on their numerically disadvantaged opponents and saw substitute Andre-Pierre Gignac hit the crosbar, but Ireland battled manfully to keep the deficit to one.

Didier Deschamps' men will now meet the winners of England's match with Iceland on Monday, but will do so without N'Golo Kante and Adil Rami after the pair were booked and incurred suspensions.

An unchanged Ireland might still have had memories of the last meeting with France on their minds, when Thierry Henry's handball led to William Gallas' extra-time winner in a 2010 World Cup qualifying play-off contest. 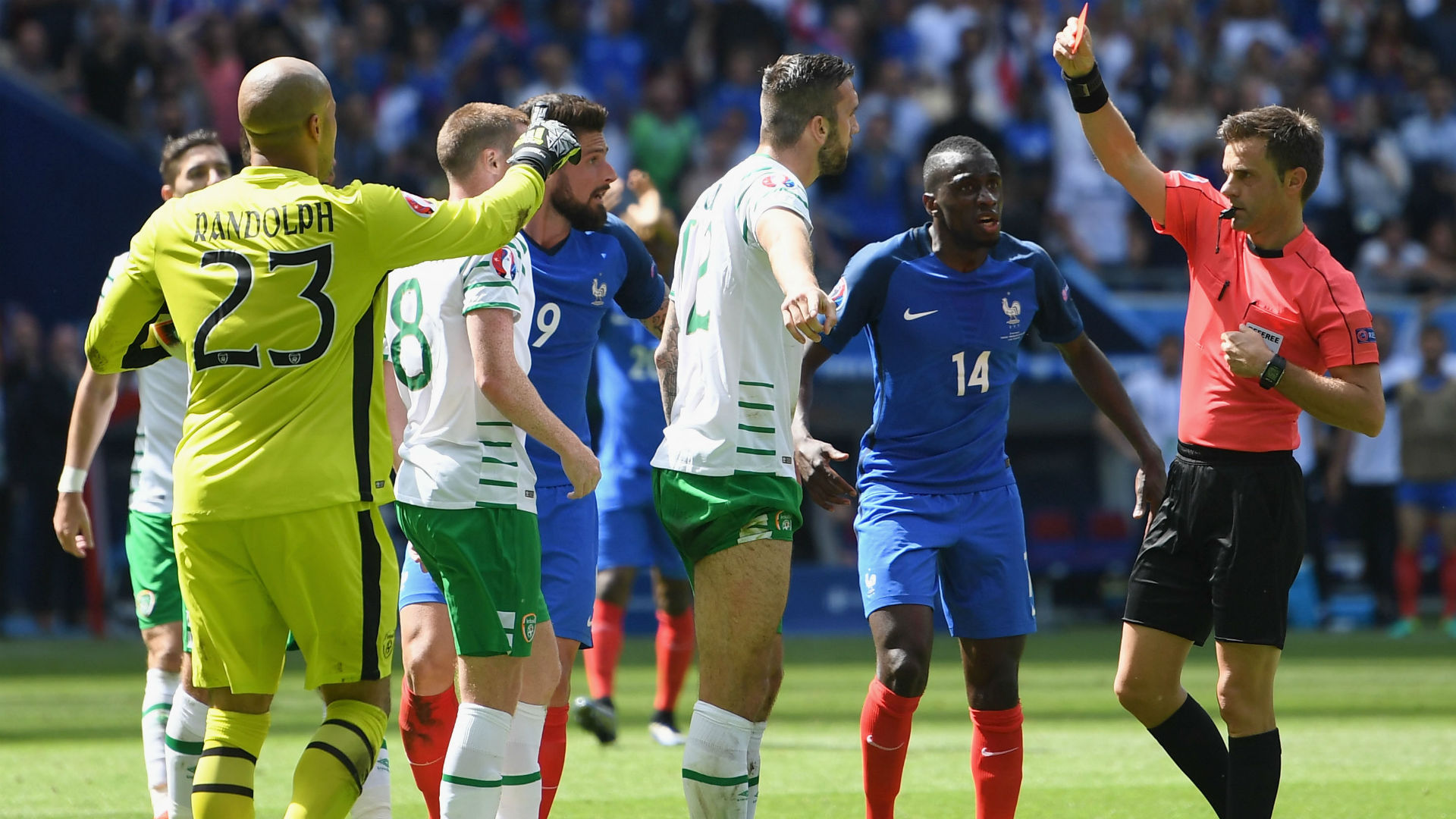 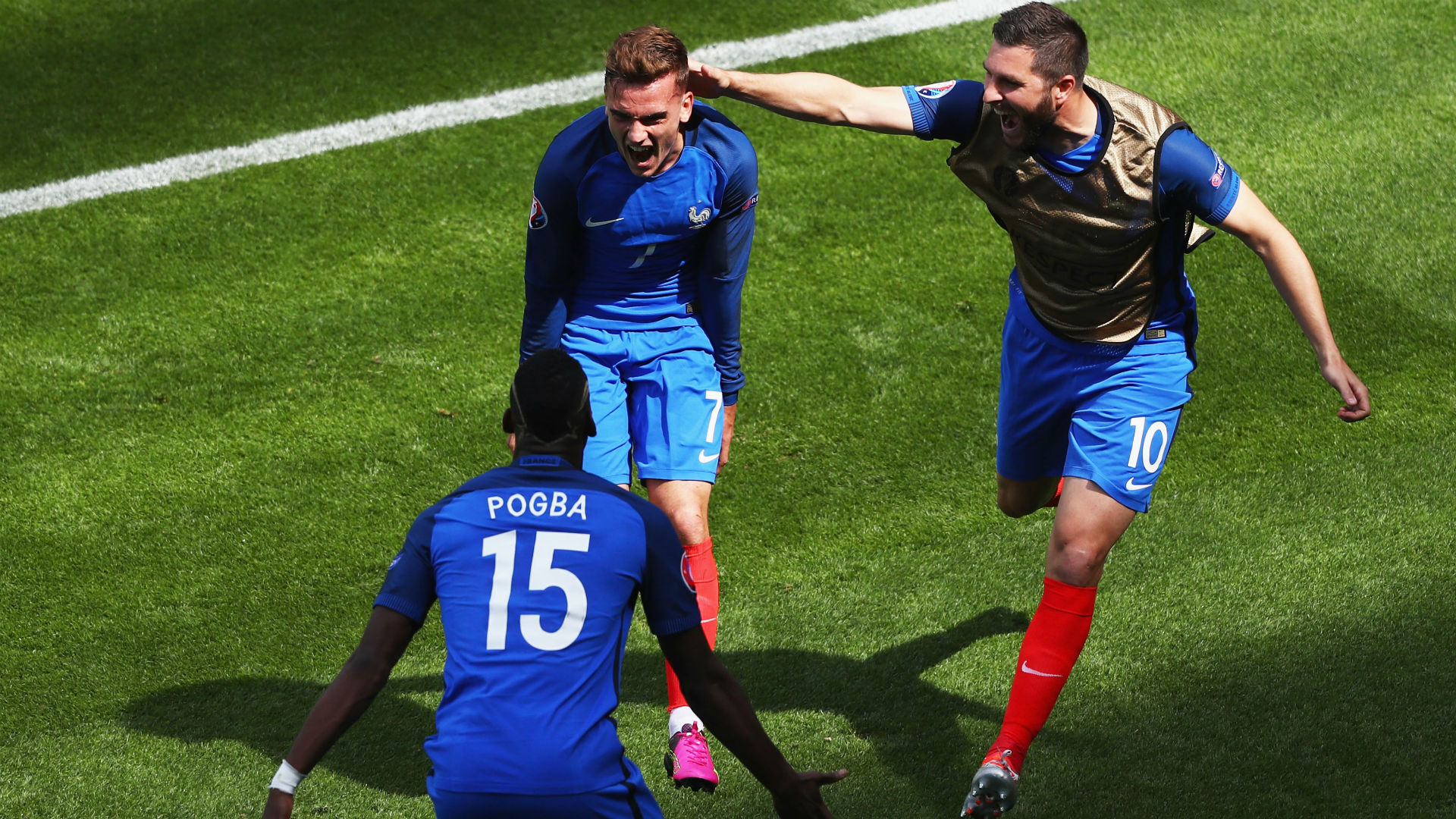 But they looked more eager to create history than dwell on it and the fevered pre-match atmosphere soon gave way to stunned silence - save for the small pocket of fans in green - when Pogba tripped Long and Brady's penalty clipped the inside of the right-hand post on its way in.

France sought to respond and the in-form Dimitri Payet, restored to the line-up after Deschamps made five changes for the draw against Switzerland, tested Randolph with a free-kick.

Olivier Giroud was then denied by an excellent defensive header from Duffy as the Arsenal striker looked poised to nod home Griezmann's 12th-minute cross.

It was not all one-way traffic and Ireland threatened again midway through the first half, Daryl Murphy's effort from the edge of the box forcing Hugo Lloris into a smart stop.

However, Ireland had to survive a goalmouth scramble in first-half injury time as Payet and Griezmann were thwarted by some resilient defending.

Deschamps introduced Kingsley Coman in place of Kante as France tried to a find a way back into the match in the second half and Laurent Koscielny missed a glorious chance to level three minutes in, heading wide at the back post after Pogba flicked on Payet's set-piece delivery.

It was Lloris to the rescue at the other end as the captain steered James McClean's cross away to safety with Long lingering.

The Atletico Madrid forward struck again when he collected Giroud's knock-down and squeezed a shot into the bottom-right corner from just inside the box, but the 25-year-old was denied a chance to seal his hat-trick when Duffy fouled him as he closed on goal.

Deschamps' charges inevitably dominated the closing stages and Gignac's long-range effort rattled Randolph's bar as the hosts kept alive the hopes of a nation who experienced World Cup joy in 1998 when they lasted hosted a major tournament.

Griezmann: I want to play in the centre