Having been released by Bayern Munich as a youngster, the 17-year-old is now catching the eye of some of Europe's biggest clubs

German football is going through something of a transitional period.

From World Cup winners in 2014 to an embarrassing first-round exit in Russia four years later, many of those who lifted the game's greatest prize in Brazil have begun to be moved on, whether by their own choice or that of coach Joachim Low.

Regardless, the emergence of Serge Gnabry, Leroy Sane and Kai Havertz, among others, means that Die Mannschaft head into Euro 2020 still regarded as, at worst, a dark horse, to lift the trophy at Wembley next summer.

However, there are those in Germany who believe that the generational talent most likely to put the nation back on top of the international game has yet to break into the mainstream.

At just 17 and playing his football in Austria's second tier, Karim Adeyemi might not immediately strike onlookers as one of Europe's hottest prospects.

But after a childhood in which he had to overcome a number of obstacles to even give himself a chance of turning professional, the youngster is attracting the interest of some of the world's biggest clubs.

Adeyemi's ability was first noted by hometown club Bayern Munich, though he only truly started to stand out after joining SpVgg Unterhaching, who had a brief spell in the top flight around the turn of the century.

"From a sporting perspective, it was completely clear that he could become a professional," Unterhaching president, and former Bayern and 1860 Munich midfielder, Manfred Schwabl tells Goal and SPOX.

"The only thing that could ruin the career of the boy was if he got injured or if we personally got something wrong."

Almost everyone at the club has a story to tell about Adeyemi's time with the club. In Schwabl's case, it is the youngster's dominant performance in the 2013 Merkur Cup, which is regarded as a Champions League for players under the age of 11, which remains etched in his memory.

"I met him in the beer garden and asked him if he wanted to have a pizza," the former Germany international recalls.

Adeyemi obliged in a pair of performances that saw him, as Schwabl claims, "rock the event all by himself", with the local press using a Mario Balotelli-esque image of a topless Adeyemi celebrating one of his goals against Bayern to lead their coverage of the competition.

Bayern had obviously been aware of Adeyemi's talent beforehand. After all, it was they who had discovered him, but they chose to release him because of his issues with punctuality and their concerns over his reliability.

Luckily, in Schwabl Adeyemi found an ideal mentor at Unterhaching. 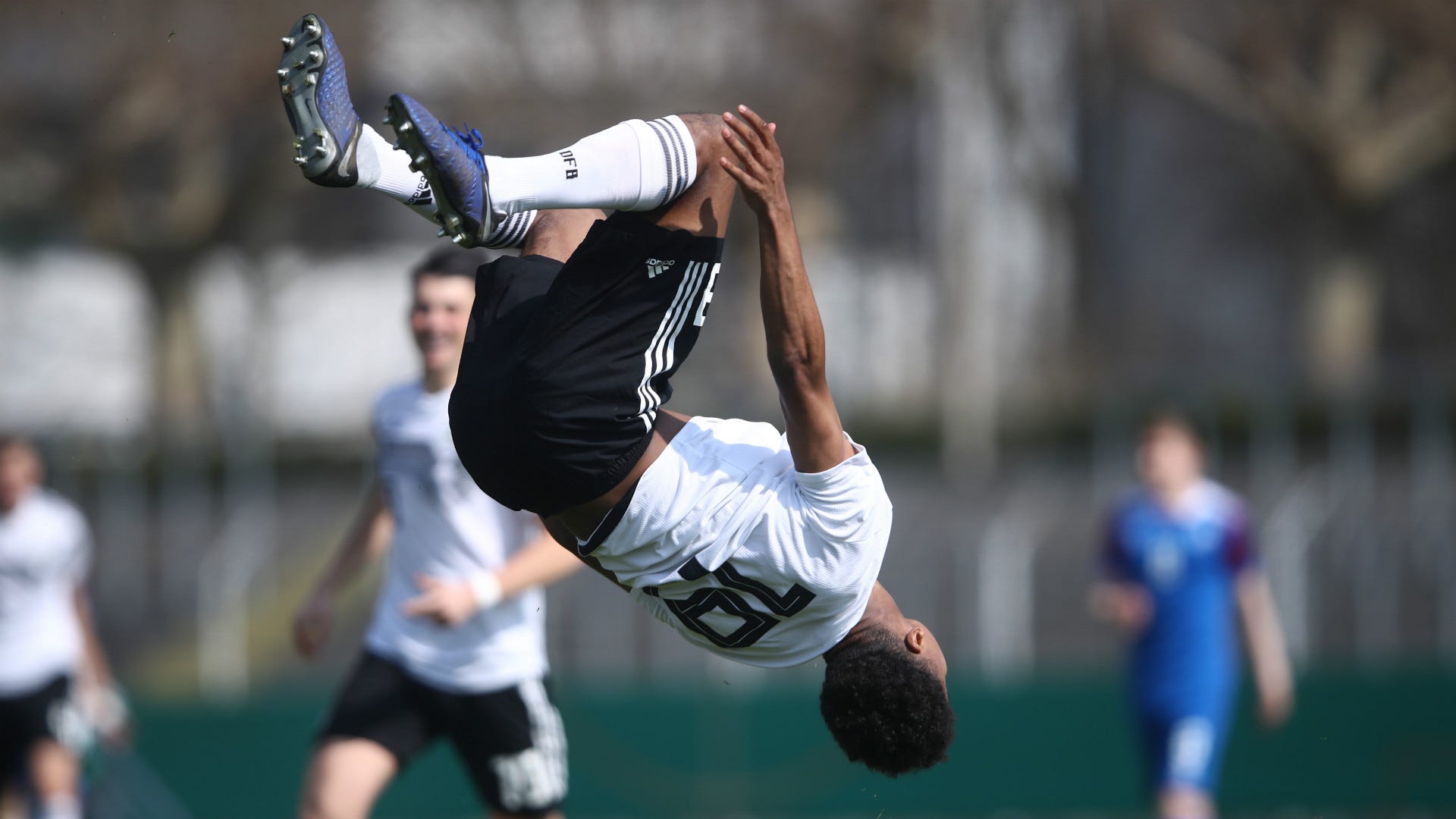 The youngster's carefree attitude was getting him into trouble at school, with Schwabl regularly having to speak to Adeyemi's teachers regarding his beahviour.

"He said to himself, 'I'm only marginally interested in school, I'm going to be a professional footballer anyway,'" Schwabl explains.

"In school sports, he forgot his sportswear; in math lessons, his geometry equipment – just small mistakes."

Schwabl, though, felt he needed to take action, so banned his protege from both training and playing until he improved at school, much to the chagrin of the club's coaches.

Still just 12 years old, Adeyemi would ride his bike from his parents' apartment to the training pitches, only to be told by Schwabl and the coaches that he could not join him.

He was also warned that his replacement in the team would be able to develop while Adeyemi was away, which lit a fire in the boy to show that he could learn and resume his passion.

"It spurred him on. A few weeks later, we received feedback from the school that Karim is becoming a model student, always courteous and always helpful to his classmates," says Schwabl with a laugh.

Consequently, Adeyemi was welcomed back, and he has only been looking forwards since.

Quickly promoted to play above his age group, he would regularly leave opponents for dead with his devastating speed and quick feet, leading from the front with both his ability and his will to win.

"He used to be a bit of a shrew," Ognen Zaric, who coached Adeyemi in Unterhaching's Under-17s side, tells Goal and SPOX. "The key was then that we quickly gave him a lot of responsibility in the team. He did a great job."

Perhaps his crowning moment came as a 15-year-old in the U17 championship game against FC Heindeheim. Unterhaching found themselves down to 10 men at half-time with the game still goalless.

"When we were in the dressing room," Zaric reminisces, "Karim suddenly spoke up and said, 'Coach, stay calm, I'll fix it.' In the end, we won the game 2-0 and Karim scored both goals after great solo runs."

After making just 15 appearances for the U17 side, scoring 15 goals in the process, he advanced to the U19s, and with that greater exposure came interest from clubs across the continent.

"In January 2018, Chelsea requested I flew to London with Karim and his father," Schwabl reveals.

Adeyemi was invited to train for a week with the Premier League giants' U17 side, though they were not the only English club interested, with Schwabl also confirming that he and the player's father were flown to Liverpool to discuss a potential move. 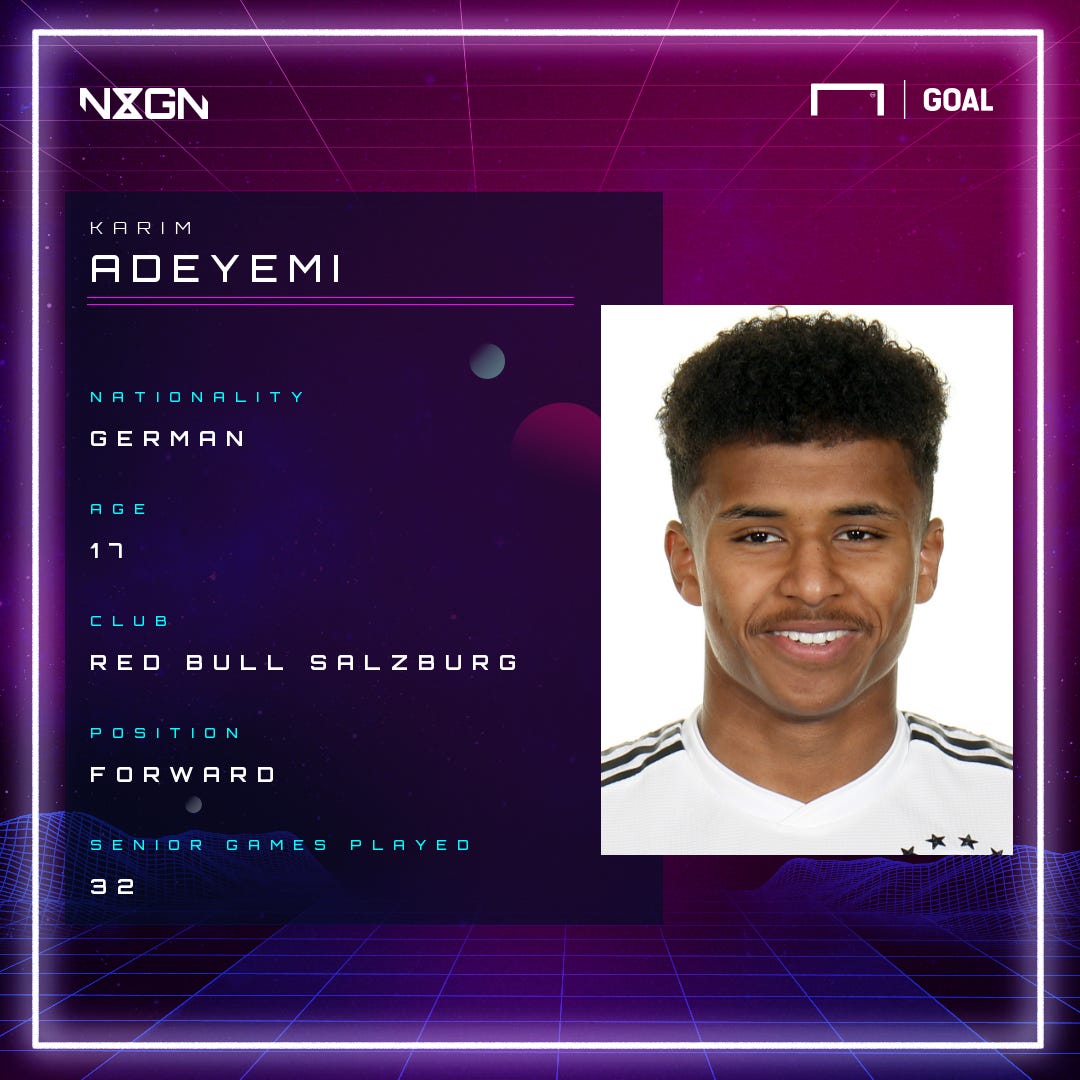 The first offer that truly interested them, however, came from slightly closer to the home in the shape of Red Bull Salzburg.

Unlike in Germany, Austrian clubs are permitted to play 16-year-olds in senior football – which meant Adeyemi could make the next step in his career sooner rather than later.

"It was like winning the lottery for him," Schwabl says. "We knew that he was physically ready, so why should he stay in the U19-Bundesliga? This is a children's league and has nothing to do with men's football."

In the summer of 2018, a deal was reached for Adeyemi to swap Munich for Salzburg, with Unterhaching receiving a club-record fee for a sale of around €3.35 million (£2.9m/$3.7m). Adeyemi was loaned out to Salzburg's sister club, FC Liefering, who play in the second division, and he has thrived there, either on the left-hand side or as a central striker.

His record of 13 goals and nine assists in 32 matches for the club has seen some question how long it will be until he is recalled to join the likes of Erling Braut Haaland and Dominik Szoboszlai in the Salzburg first team.

"I think they will recall him in the winter," Schwabl opines. "Then, he has every opportunity, and he could be ready for the Premier League in a year and a half."

Whether he even stays in Austria that long, though, is unclear.

Barcelona recently offered €15m (£12.8m/$16.5m) to take him to Camp Nou while Borussia Dortmund see Adeyemi as a potential successor to Jadon Sancho, presuming the England international departs the club in the coming months.

"He was born for the top," enthuses Zaric. "With him, I see no limit."

He is not alone in that regard, with Adeyemi having recently been awarded the Fritz Walter Medal as Germany's outstanding player at U17 level.

Schwabl, though, is proud of not just how Adeyemi has grown as a player, but also a person.

"The boys can all kick," he points out, "but staying down to earth is the real art and Karim apparently understood that, which makes me very proud personally."