The coach deserves to be fired, for both his results and atrocious style of play, but Juventus' problems go beyond the manager and his players.

Angel Di Maria was quick to take the blame for one of the darkest days in Juventus' history.

"Leaving the team a man down in such a difficult moment of the season made us lose the game," Di Maria wrote on Instagram after his red card in Sunday's humiliating 1-0 loss at Monza, which DAZN's Massimo Ambrosini described as the Old Lady's worst performance in 15 years.

"It is purely my fault that we lost."

It wasn't, though. Not by a long shot.

Di Maria's dismissal undoubtedly made a bad situation worse, but it was merely a symptom of Juve's current malaise – not the cause.

At least he faced the music, though. He was willing to stand up and acknowledge his mistake. Those really responsible for the dreadful situation Juventus now find themselves in said nothing on Sunday. Or Monday.

Indeed, it felt fitting that when the full-time whistle blew at the U-Power Stadium and the camera turned to the box where Massimiliano Allegri had been forced to sit due to his suspension, the coach had already disappeared from view.

It was his assistant, Marco Landucci, who had to face the media afterwards because of Allegri's red card at the end of a 2-2 draw with Salernitana last week, while the players had to bear the brunt of the fan backlash.

Indeed, it was hard not to feel a degree of sympathy for Leonardo Bonucci & Co. as they stood in front of the away end and were subjected to a torrent of abuse. 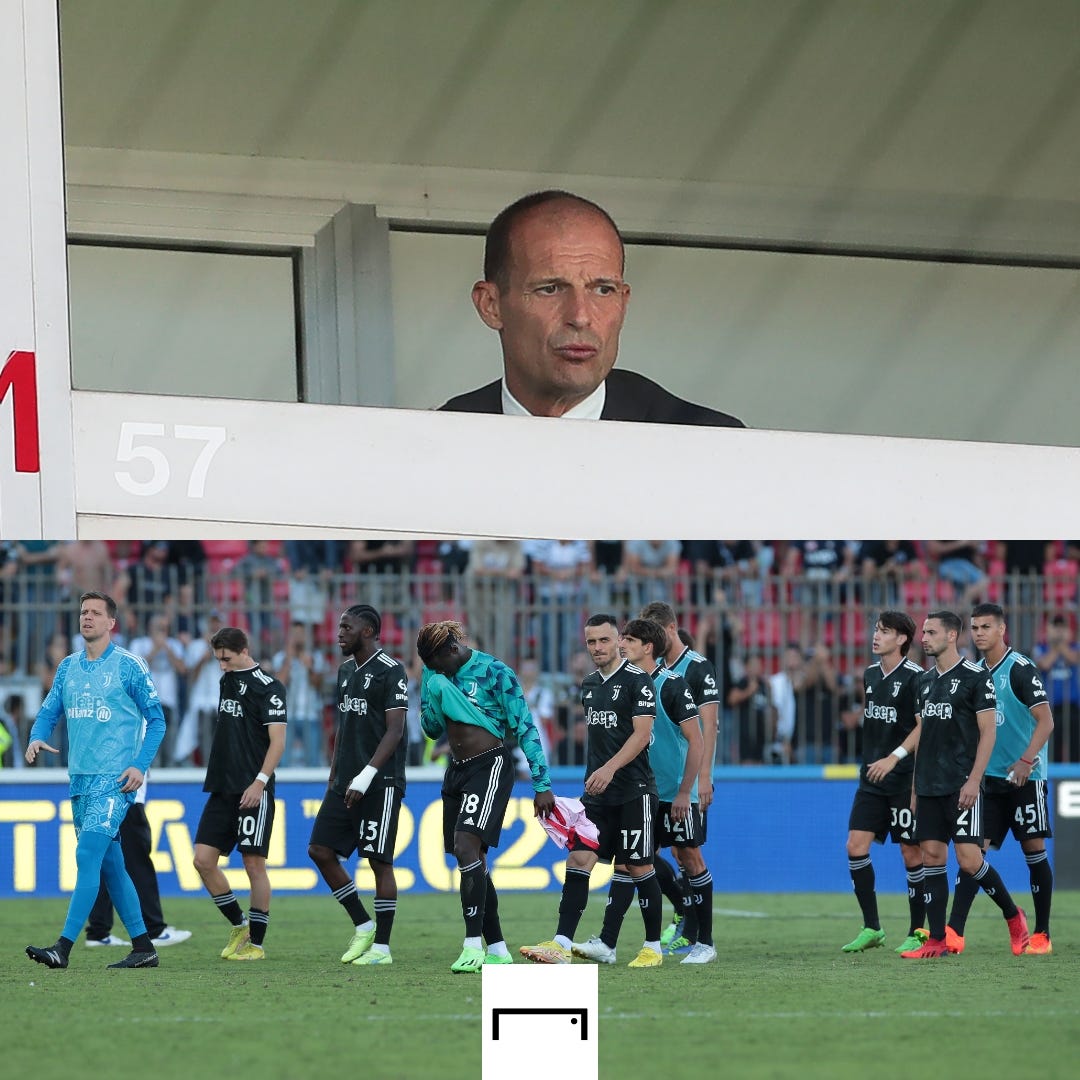 They had undoubtedly performed poorly, even before Di Maria's straight red card for a silly elbow to the chest of Armando Izzo, but Juve's problems go way beyond the players.

Not that Allegri agrees. On Saturday, he spoke to Corriere della Sport journalist Mario Sconcerti, and effectively claimed that there was little he could do about Juve's form given he has "half a team" out injured.

"Quality always lies in the players, not in the tactics," he argued. "A good coach has to think about the players first."

Juve are undeniably missing some key men at the moment – Paul Pogba, Federico Chiesa, Wojciech Szczesny, Manuel Locatelli, Adrien Rabiot and Alex Sandro are all unavailable – but this is a club with the biggest budget in Italy and they presently sit eighth in Serie A, seven points off top spot after just seven games played.

They've also lost their opening two games in this season's Champions League, leaving their hopes of reaching the knockout stage hanging by a thread. Of course, the fans are more concerned with their prospects of qualifying for next season's tournament.

After all, their conquerors on Sunday, Monza, had never previously won a game in Serie A, while Juve have claimed just two victories in all competitions this season.

Furthermore, Allegri's claim in the Corriere that matches are effectively decided by individual quality provoked incredulity among many supporters and pundits.

It felt like he was arguing that a coach has little influence over what unfolds on the pitch. Some would agree, of course, at least when it comes to Allegri.

"There are those that teach you how to play by memory: you go onto the pitch and you already know what to do. You don't have to think.

"Then, there are coaches like Allegri, who give you an idea of the general game plan and leave the interpretation of the play to individual players.

"There, you need to understand if the players are capable of doing this, or if they need something else."

Juve's squad would certainly appear to fall into the latter category. 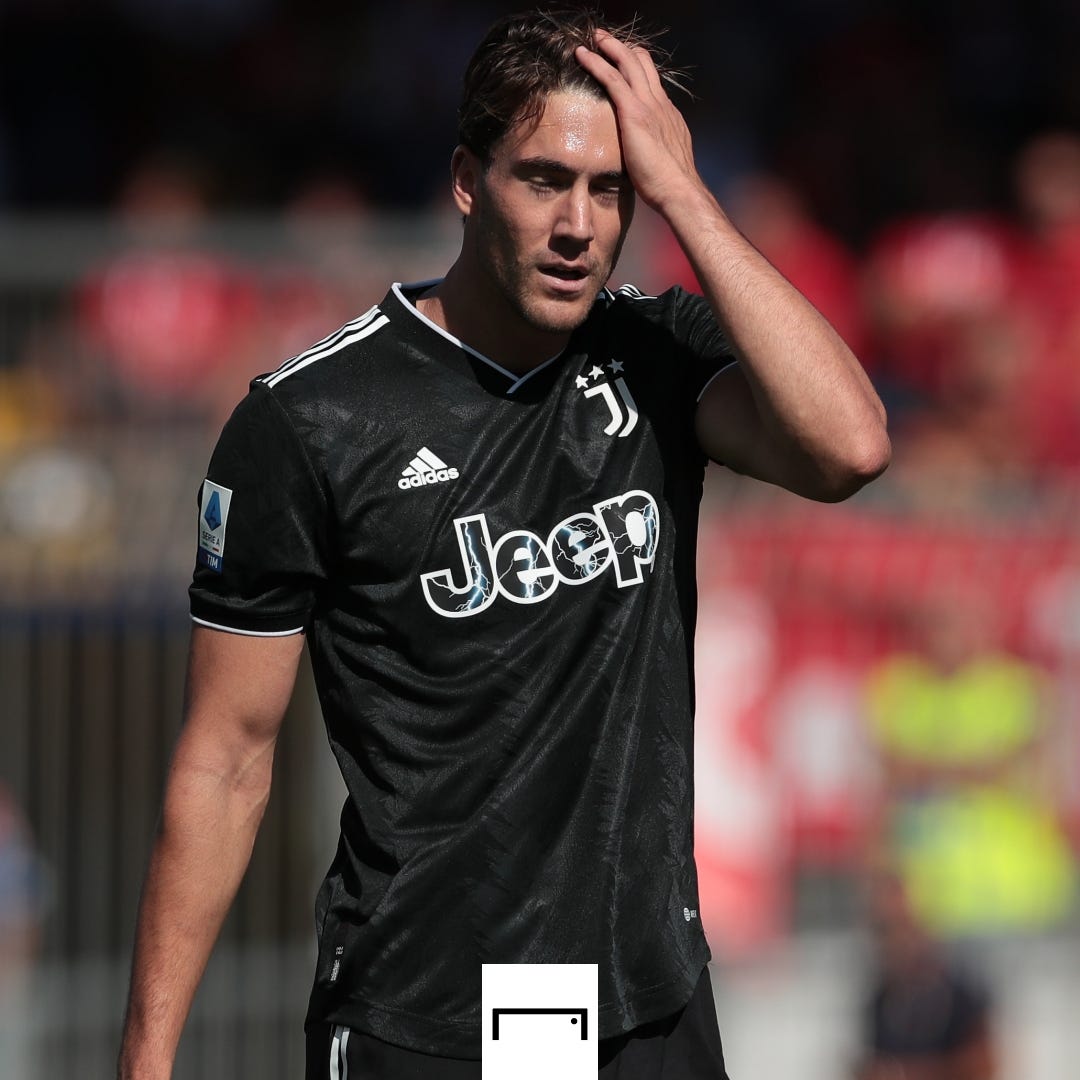 There has been a distinct lack of coherence in their displays. In Dusan Vlahovic, they have a potential generational attacking talent, and yet he rarely touches the ball.

That might be fine at Manchester City, where the striker has a plethora of creative attacking talents buzzing about him and is only asked to finish off well-rehearsed attacking moves. But, at Juve, Vlahovic is disconnected, left operating in isolation and looking utterly lost. Just like many of his team-mates.

Least of all Allegri, who really does look incapable of influencing Juve's play in any positive way.

And it's been like this for a long time. Many of Juve's performances last season were atrocious, most notably the decisive home loss to Villarreal in the last 16 of the Champions League.

At the time, an irate Allegri accused those who labelled that humiliating exit as an abject failure of "intellectual dishonesty" – but it was impossible to view it any other way, given the disparity between the two sides' respective resources.

It's also impossible to view Allegri's second spell at Juve as anything other than a shambles, or an "endless disaster" as the Gazzetta dello Sport called it.

He was meant to restore order, to return the Old Lady to winning ways, but last season the club failed to win a trophy for the first time since 2010-11.

Worse still, the football has been horribly pragmatic, genuinely difficult to watch at times.

Allegri has always insisted that he's utterly disinterested in his side winning any beauty contests but his Juve aren't just ugly, they're also embarrassingly ineffective.

They play a form of catenaccio, even against inferior opposition, and the modern approach to pressing looks like a foreign – or perhaps forbidden – concept to the players.

Even at a club where 'winning is the only thing that counts', supporters and the pro-Juve press have turned against the coach and his outdated style of play. 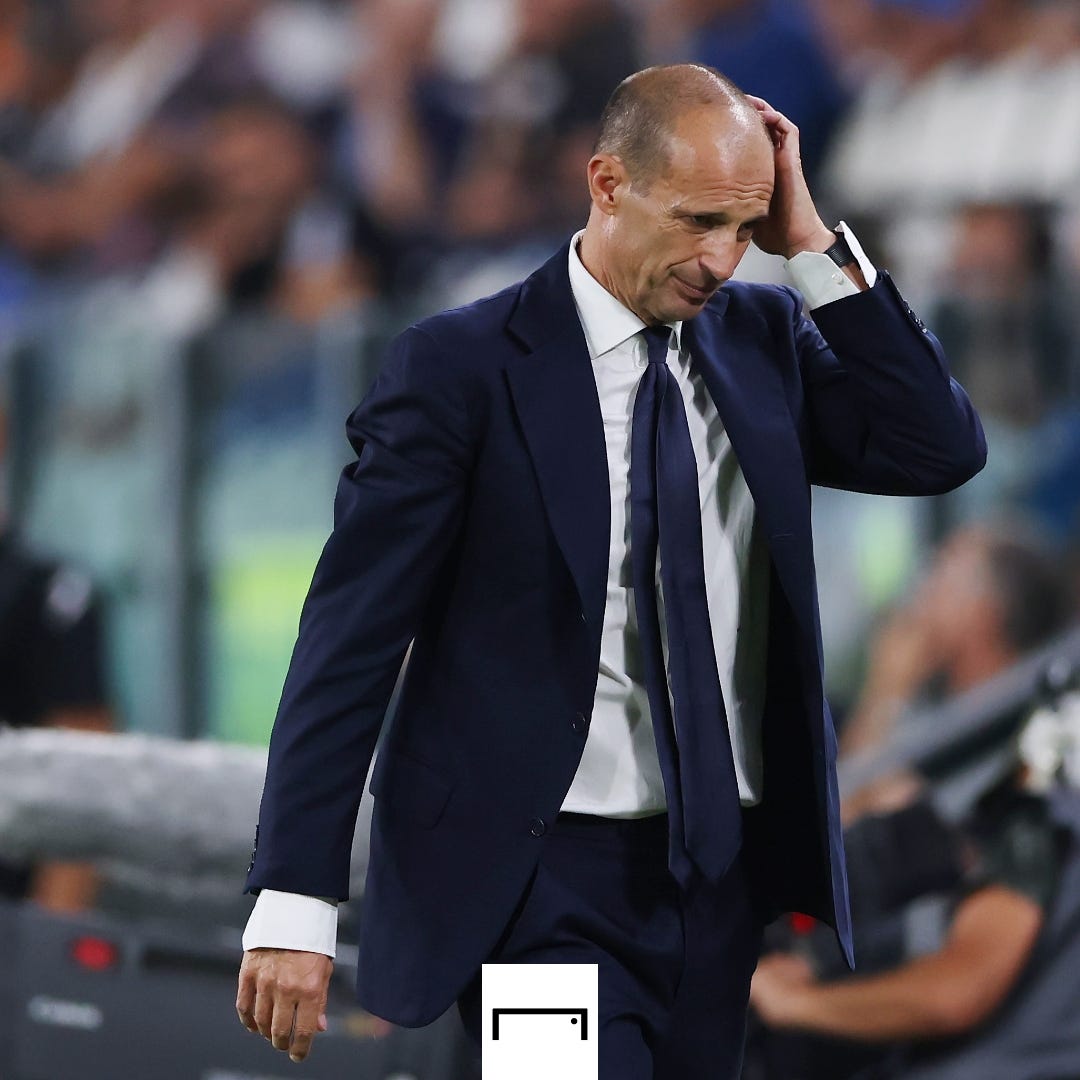 In the past week alone, Tuttosport has declared 'Juve-Allegri, enough is enough', and implored him to 'Make the fans enjoy themselves too', after the Tuscan laughed off talk of him being dismissed.

Meanwhile, one particular fan could be heard on the live TV broadcast of the Monza game repeatedly shouting 'F*ck off, Allegri!'

He won't, though – primarily because his gross salary of €13 million (£11.4m/$13m) a year contract runs until 2025. And Juve are unlikely to sack him for the very same reason. Indeed, when a fan last week shouted at Maurizio Arrivabene to fire Allegri, the CEO replied, "Then you'll pay for who comes next?"

It was an attempt at humour, of course, but there's an element of truth in every good joke and there's no denying that cash-strapped Juve would struggle to cobble together the money to hire a top-class replacement for Allegri right now given his dismissal would cost them a small fortune (€36m by Calcio e Finanza's reckoning).

Arrivabene even insisted before the Monza game that it would be "madness" to sack Allegri. But, at this stage, can they really afford not to? Juve's season is in danger of unravelling already.

Allegri's interview with the Corriere, which he tried to pass off as a "chat" with a journalist friend, took the club completely by surprise, sparking rumours of a fine, while the Gazzetta has claimed that it went down like a lead balloon in the dressing room.

Juve president Andrea Agnelli has backed himself into something of a corner, though.

It was very much his idea to bring Allegri back. It's no secret that Pavel Nedved does not get on with the latter, allegedly playing a key role in his departure in 2019, and the Czech is reportedly in favour of Allegri's immediate dismissal.

Arrivabene, meanwhile, is said to only be in favour of a change of coach if a low-cost replacement can be found. They've already left it too late, though, to move for Roberto De Zerbi, who has just been appointed as Brighton's new boss.

Consequently, there is now talk of turning to Primavera coach Paolo Montero. Again, though, Agnelli is reluctant to make the same mistake he made when appointing coaching novice Andrea Pirlo.

Juve are expected to continue with Allegri in the hope that he sparks an immediate turnaround after the international break and ensure that by the time the likes of Pogba and Chiesa return after the World Cup, the team will be in a much better condition.

However, the very real and understandable fear is that things will get worse before they get better. Or perhaps that things won't get better while Allegri remains at the helm.

Indeed, Juve don't just look mentally fragile right now, they look physically weak too, with their players not only appearing sluggish on the field but also worryingly susceptible to muscular issues.

Allegri's training sessions, and the work of his fitness coaches, has become a major talking point since the departure of Matthijs de Ligt for Bayern Munich in August, with the Dutch defender allegedly telling his new boss, Julian Nagelsmann, that his first training session in Bavaria was the toughest he'd had in four years.

It, therefore, feels significant that over the past few days, Juve have given Giovanni Andreini, the club's head of performance, more say in the analysis and management of the team's strength and conditioning work.

It's hardly surprising that Agnelli is keen to find alternative solutions to Juve's ailments. Sacking Allegri wouldn't just be expensive, it would be hugely embarrassing.

Agnelli effectively admitted by re-hiring Allegri that he had erred by ditching him in the first place in order to try to implement a more adventurous and aesthetically pleasing approach, first with Maurizio Sarri and then Pirlo.

Will he really now admit that he made an even bigger mistake by bringing him back? He risks looking like he has no idea what he's doing, which is precisely why Juve legend Marco Tardelli believes the coach's job is safe.

"Allegri at risk?" he mused on RAI. "No, because if he goes, those that chose him would also have to go." 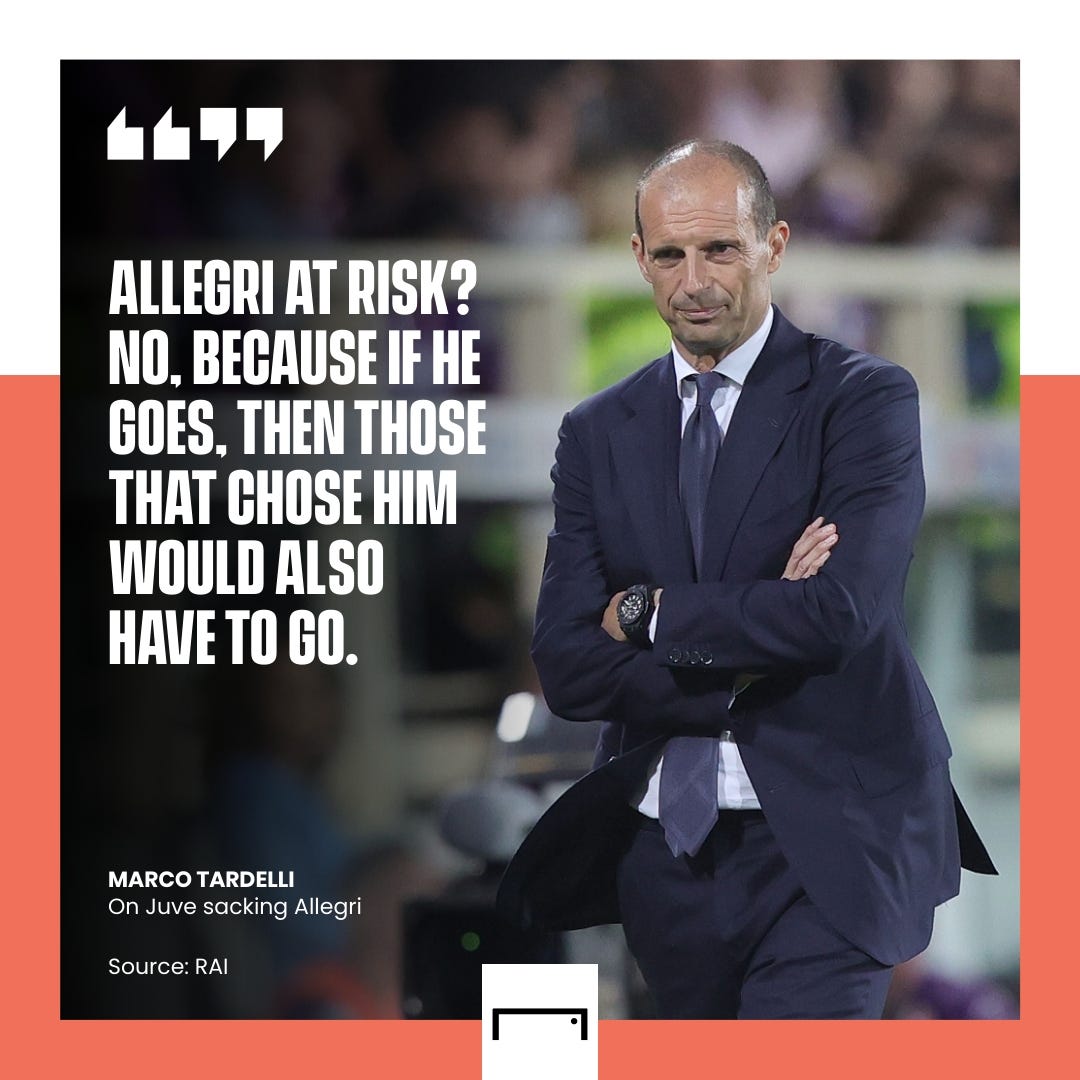 There are plenty of supporters who would welcome a change at the very top, though. Some feel that it's high time that John Elkann, the CEO of Exor, Juve's parent company, intervened and ended his cousin's presidency.

Certainly, Agnelli's reputation as an astute administrator has taken a battering over the past four years, even discounting his humiliating failed attempt to launch a European Super League, which enraged so many of his Serie A counterparts.

Beppe Marotta was marginalised and allowed to join – and revive – Inter, the Cristiano Ronaldo project proved an abject failure, the club's financial instability was brutally exposed by the pandemic, fans have been enraged and alienated by ticket prices, one dreadful hire has followed another, and there no longer appears to be a clear plan in place.

Heads have rolled as a result, including that of Fabio Paratici, who had essentially taken over from Marotta as CEO. But Agnelli's role in Juve's dramatic decline over the past years is now finally under intense scrutiny.

It is imperative that he take some responsibility for the mess the club now finds itself in – or, at the very least, publicly addresses the situation.

Di Maria wrote on Sunday: "I am a professional but also a human being who makes mistakes and can recognise them."

Agnelli simply has to do likewise. He needs to accept that bringing Allegri back was a dreadful decision – and move to rectify it.

At this stage, it feels like the president's only hope of saving his job, is firing Allegri from his.