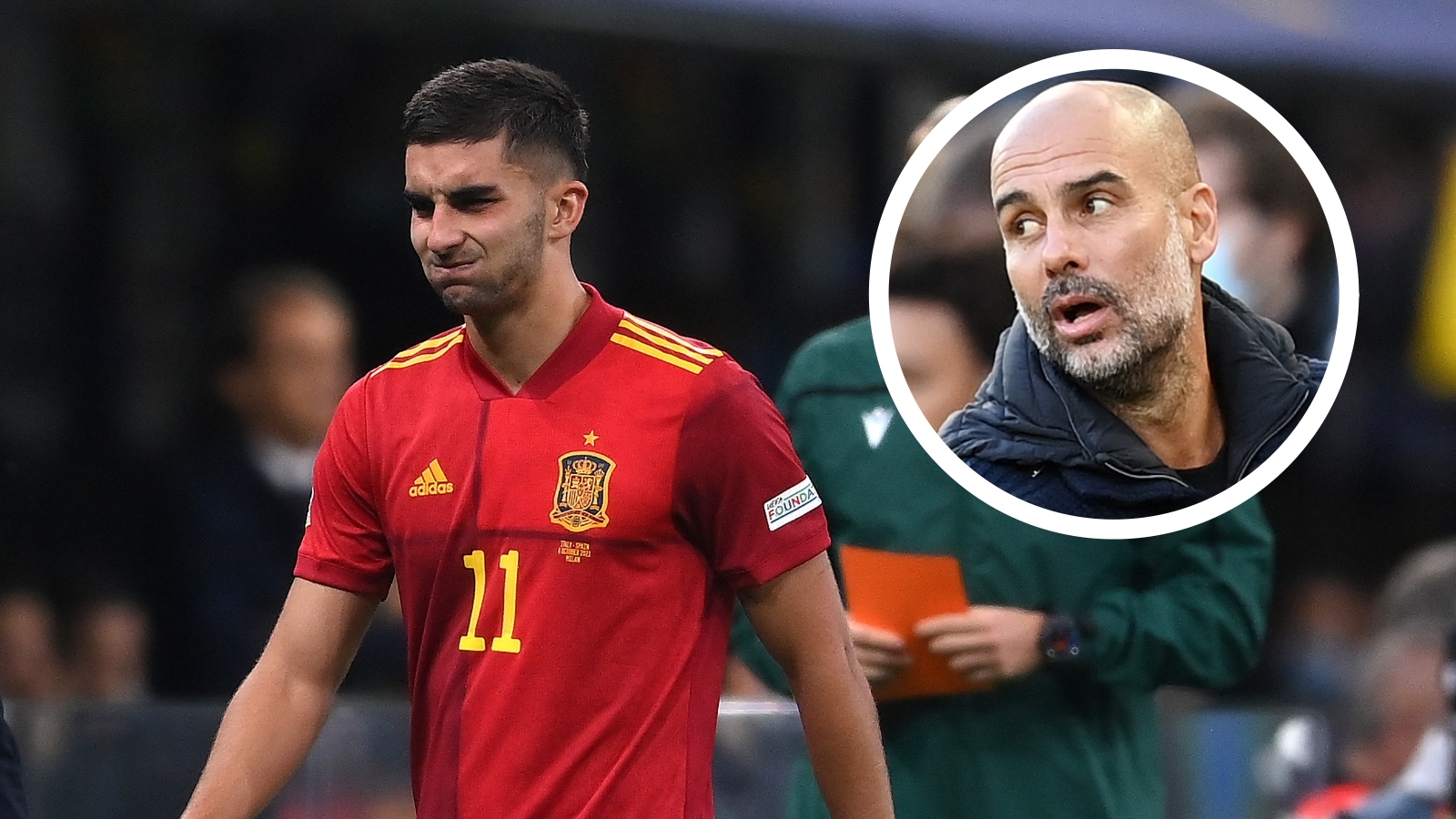 The 21-year-old forward could be out for up to the three months, only adding to the Premier League champions' goal-scoring problems

Just as Pep Guardiola was closer to getting to grips with his striker issues, Manchester City were hit by two more.

First, Ferran Torres returned from the international break with a fractured metatarsal in his right foot that his club manager fears could rule him out for up to three months.

Then, Raheem Sterling gave an interview where he said he would consider leaving the Etihad if he could get more game time elsewhere.

It’s an unhelpful start to a busy 21 day-period before the next international window, with City set to play seven games, culminating in the Manchester derby on November 6.

Torres will miss all of those fixtures, as well as Spain’s subsequent World Cup qualifiers against Greece and Sweden, which is also a major blow for La Roja coach Luis Enrique.

The winger's unavailability represents a more immediate dilemma, though, for Guardiola, who is still reeling from the summer loss of striker Sergio Aguero coupled with the failure to sign Tottenham’s Harry Kane – or indeed any replacement for the Argentine centre-forward.

The City boss would have wanted to rotate his squad regularly in the coming weeks, with a domestic fixture list predominantly filled by mid-table opponents that he would usually be confident of beating even with much-changed line-ups.

However, Torres' injury means he has one less option. Academy striker Liam Delap could have been a useful alternative, but he is still on his way back from an ankle injury.

Gabriel Jesus, who is already out of Saturday’s clash against Burnley after returning late from Brazil’s game against Uruguay on Thursday morning, has also expressed a preference to play as a winger, although Guardiola says he will still use him as a striker on occasions.

However, the Catalan will most likely ask someone to play out of position as a false nine. Phil Foden and Jack Grealish were tasked with the role in recent away games at Chelsea and Liverpool, while Kevin De Bruyne and Bernardo Silva have been asked to play through the middle in the past.

It remains to be seen whether Sterling's public utterance of wanting to play more will result in extra minutes on the pitch – or a spell on the naughty step for speaking out.

But even the England international, just like the rest of his team-mates, would represent nothing more than a temporary measure, as it is Torres who has impressed most when played up front in recent weeks.

Indeed, despite joining as a winger for a bargain £21 million ($27m) from Valencia in 2020, he has enjoyed most success leading the line, with Torres even becoming the youngest Spaniard to score in three consecutive Champions League games.

He then finished last season in style, with five goals in his last four Premier League starts, including a hat-trick against Newcastle which made him the youngest ever player to score a treble under Guardiola, taking the record from Lionel Messi.

For Spain, Torres has become an even more important figure – scoring 12 goals from just 22 appearances and spearheading an exciting new generation. That he could have picked the injury in the Nations League semi-final victory over Italy and then played with it in the final against four days later only underlines his importance and commitment to his country's cause.

Despite being unsurprisingly frustrated by the loss of such an important player for a key part of the campaign, Guardiola was, at least, understanding when it came to Torres' injury.

"These things can happen here, at home, the national teams – it happens," he told a news conference. "I know the manager perfectly from Spain, Luis Enrique, and he treats Ferran and the players as best as possible."

While Torres will be seriously missed by the national team, who are still secure their place at Qatar 2022, he had become a more valuable player for Guardiola, as the Catalan coach manoeuvres his team to make the most of his assets.

Despite the depth of quality attack-minded players at City, goal-scoring can still be a problem. Of the seven matches they have played, they have failed to score in two and scored just once in two others.

The fact that they have scored 12 in the other three games underlines the fact that when they get it right, City remain the most dangerous side in the Premier League.

Torres started both 5-0 victories over Norwich and Arsenal – having a goal harshly ruled out in the first before claiming two goals and an assist against the Gunners a week later.

He is slowly pushing his way into becoming a regular in Guardiola’s plans, which is why this significant setback has come at such an unfortunate time for him.

Similar to the rise of his good friend Foden, Torres' emergence has been gradual and he is still not seen to have the experience to play in the biggest matches for his club just yet.

He did not play a single minute of City’s four Premier League and Champions League matches going into the international break, with three of them against Chelsea, Liverpool and Paris Saint-Germain. His only appearance during that period was in the comfortable Carabao Cup win over League One Wycombe Wanderers.

However, that trust is being earned, with consistently impressive performances pushing his claim to become a regular in a side that can still have problems in front of goal.

The Spaniard will now return home for rest and recuperation. It will be a frustrating time for him, but maybe even more so for Guardiola, as he continues to try to adjust to life without a star striker.