It did not take Luke Matheson long to make his presence felt in professional football. About five minutes, in fact.

He was just 15 years old when the call came. A Tuesday night, a Checkatrade Trophy game. Rochdale versus Bury. Fancy it?

It was early September, and Matheson had been in school all day. It was the first day back after the summer holidays, the first day of his GCSE year.

The first day of his career, as it turned out.

That night Matheson, Manchester born, travelled to Spotland with his father, Rob. He changed alone – safeguarding rules prevented him from doing so with the rest of his team-mates – and took his place on the bench. Happy to be there, he insisted to friends and family.

Then, 13 minutes in, a chance. Connor Randall, once of Liverpool, suffered an injury. The manager, Keith Hill, turned to his substitutes. To Matheson.

At Spotland that night was Kevin Thelwell, then the sporting director of Wolves. He was there to make checks on another youngster, Daniel Adshead, but his eye was quickly taken by the long-haired, all-action right-back who emerged from the bench.

Matheson’s performance, according to several who were there, was impossible to ignore. “He just didn’t stop,” says one observer. “Within five minutes he’d made about five tackles and put in three brilliant crosses! It was some debut.”

He left Spotland that night with the man-of-the-match award, his name firmly inked into Thelwell’s “one to watch” column. “If you talk about taking your opportunity,” says one source, “well he did that, and more.”

Matheson started Rochdale’s next three Checkatrade games, including one against a Manchester City Under-21 side containing Taylor Harwood-Bellis and Tommy Doyle, before in January 2019 being handed his League One debut as a half-time substitute against Fleetwood Town. Due to his age, he was not able to have the logo of SkyBet, the Football League sponsors, on his shirt sleeve.

There would be two more substitute appearances, as well as a call-up to the England U-17 squad, before the end of that season. He started the current campaign well too, before announcing himself to a worldwide audience at Old Trafford in the Carabao Cup at the back-end of September. 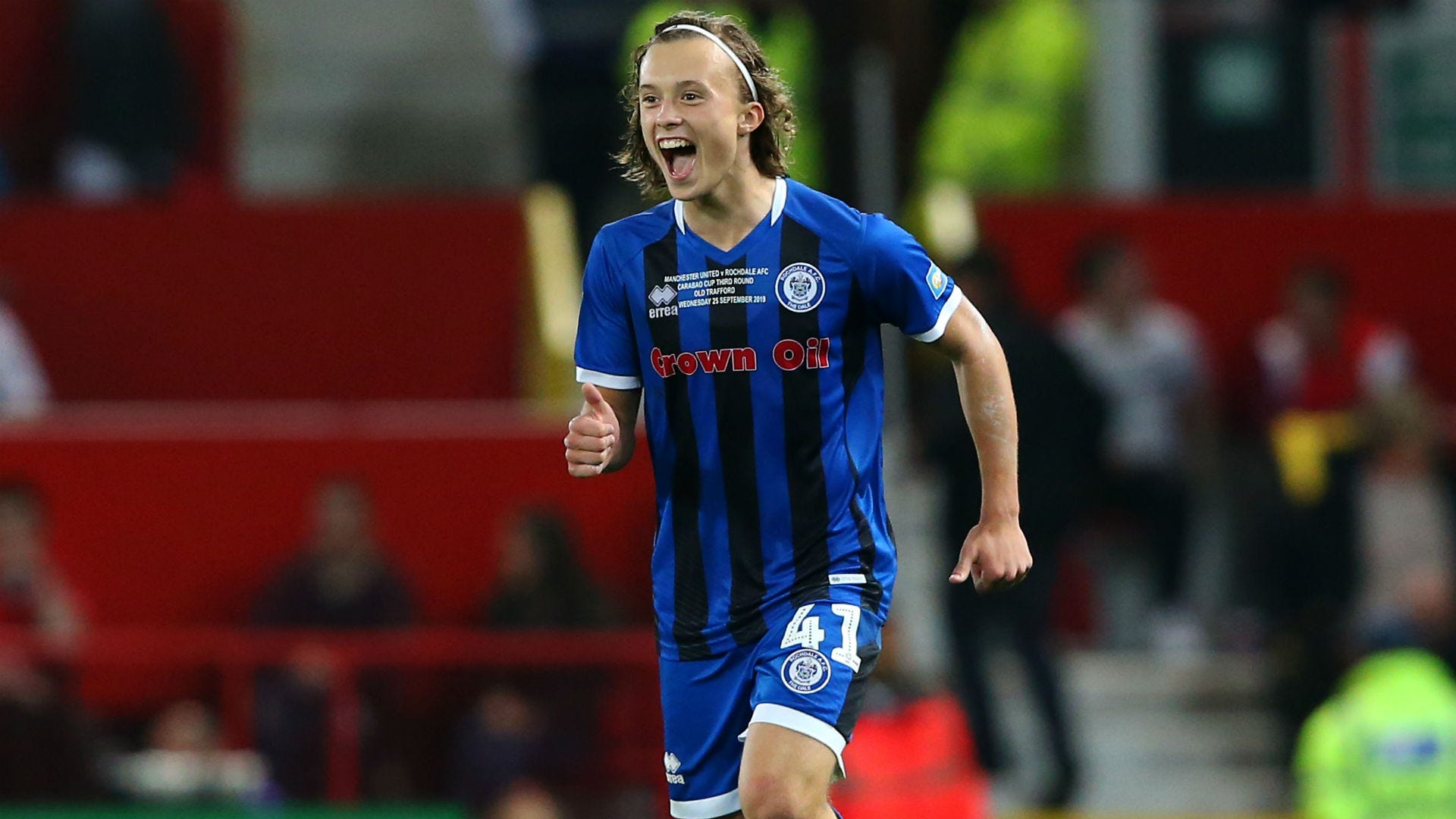 Against a Manchester United side featuring Paul Pogba, Fred, Jesse Lingard and Aaron Wan-Bissaka, among others, it was the 16-year-old who stole the show. Roared on by family and friends, including a number of teachers from Trinity Church of England High School, Matheson capped an all-action performance by scoring Rochdale’s equaliser, arriving at the back post ahead of Andreas Pereira to volley home Aaron Morley’s cross.

“That shows what he’s all about,” Rochdale team-mate Ryan McLaughlin tells Goal. “A big game, and he’s not fazed at all. He wants to stand out against big opposition, and he does. That tells you something about his mentality.”

The day after that Manchester United game, Matheson was back at Trinity, sitting a psychology exam. He is also studying towards A-levels in history and sociology. “I love education,” he has said.

He remembers being mobbed at school the next day, while headteacher Julian Nicholls recalls a flood of media enquiries, including one from talkSPORT which asked to see a copy of the exam paper. “It was crazy,” he told The Athletic. The request, sensibly, was declined. Matheson, by the way, passed with flying colours. He usually does.

On the pitch, meanwhile, his rise continued. He established himself as a regular in the league with Rochdale before Christmas, and in January made his mark against Premier League opposition again, this time Newcastle in the FA Cup.

“He was unbelievable,” says McLaughlin, who played ahead of him for the last 20 minutes. “It was on TV, and he was just flying forward, taking on experienced players over and over. He never stopped.”

Matheson set up Rochdale’s equaliser in a 1-1 draw and started the replay at St James’ Park in which he was up against Christian Atsu, Matt Ritchie and Miguel Almiron. 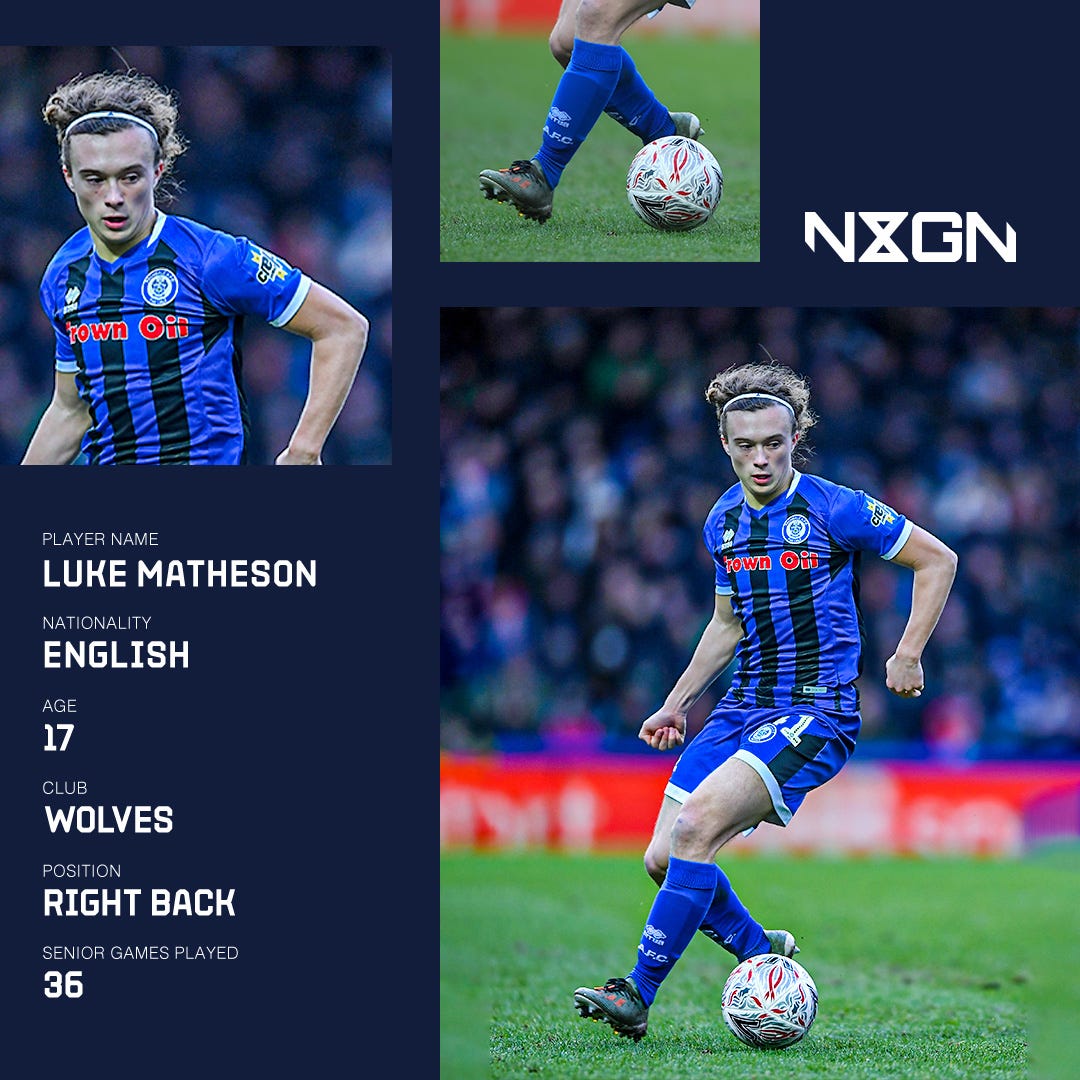 Rochdale lost 4-1, but Wolves and Thelwell had seen enough. They had tracked his progress closely and, on the final day of the January transfer window, completed a £1 million ($1.24m) deal, loaning Matheson back to Rochdale for the remainder of the campaign.

Thelwell, the driving force behind the deal, left for New York Red Bulls a few weeks later, but believes his parting gift is a good one. “We think he’s going to be a top talent," he said. “He’s everything Wolves are about.”

There had been interest from elsewhere, but Matheson and his team always felt Molineux represented the best option. Wolves’ wing-back system will, in theory at least, suit an attack-minded full-back such as he, while Nuno Espirito Santo’s habit of keeping a comparatively small first-team squad should prove helpful in terms of both development and opportunity. Geographically, too, the disruption is minimal.

“It should really suit him,” says McLaughlin. “It’s an unbelievable move for him, and a great club for him to go to.  He’s an attacking full-back with great energy and attitude. He’s got everything you need to make it in the Premier League, I think.”

Matheson’s progress since January has been monitored by Seyi Olofinjana, the former Nigeria midfielder who is now Wolves’ loan pathways manager. He will be allowed to complete his A-levels at Trinity next year. His teachers expect him to achieve top grades.

With the League One season likely to be cancelled in the next week, Matheson’s Rochdale career is pretty much over. He will leave with the club’s best wishes, a popular kid who made a remarkable impact in a short space of time.

Next up, the Premier League. Another step up, another challenge. Another exam to pass.