Brazil proved too strong for a developing Albiceleste side in Belo Horizonte, but there is plenty of promise for the future with Leo leading the way

Another Copa America will come and go without Lionel Messi picking up the trophy he most covets. For at least another year, the Barcelona star's prayers for glory with Argentina must remain unheard.

Tuesday's semi-final defeat at the hands of Brazil, however, will be received in a different manner than those infamous penalty shoot-out reverses at the hands of Chile in 2015 and 2016. It may even sting less than that chaotic World Cup exit to France almost 12 months ago to the day.

For while the big prize may have eluded Argentina, they fought all the way to the end in going down 2-0 to their bitter rivals. And, whisper it quietly, a tournament that began with the Albiceleste in complete and utter disarray may just have ended with a hint of a new, exciting team ready to explode over the coming years.

The magnitude of Argentina's task in Belo Horizonte was laid bare by a cursory reading of the two team's line-ups. On the home side, two current Champions League winners in Alisson and Roberto Firmino, Casemiro, a four-time holder of Europe's top trophy; the experience and class of Thiago Silva, Dani Alves and Philippe Coutinho; the youthful verve of Arthur and Everton.

On the opposite side of the pitch were six players with less than 20 caps for their nation, the team itself boasting in total just 390 international appearances before kick-off – 292 of which belonged to either Messi, Sergio Aguero or Nicolas Otamendi - to their rivals' 488. Brazil enjoyed the advantage of putting in motion their own renovation under the knowledgeable eye of Tite three years ago - in the wake of disaster at the 2016 Copa. They are a well-oiled machine with arguably the best defence of any major footballing nation right now.

Argentina in contrast have gone through four different coaches since Tite took over from Dunga, and Tuesday marked the first time they had managed to repeat the same starting line-up from one game to another since the 2016 Copa group stages, no less than 40 games ago.

To the surprise of many, the Albiceleste eventually came together in Brazil and, with a little more good fortune and a slightly more solid defence they might just have sprung an upset in Belo Horizonte, site of that infamous 7-1 reverse to Germany that still sticks in the Selecao's craw. As it was a goal in each half from Gabriel Jesus and Roberto Firmino sealed the visitors' fate, each strike coming from a succession of errors at the back and the second just moments after a strong penalty shout from Sergio Aguero had been turned down at the other end.

It could have been much worse, however. After two games of this Copa a place in the knock-out stages appeared a distant dream, and even against Venezuela the jury was very much out over whether victory was possible. A semi-final exit to the hosts and favourites represents the most acceptable of outcomes for Argentina, with plenty to build on for the future. 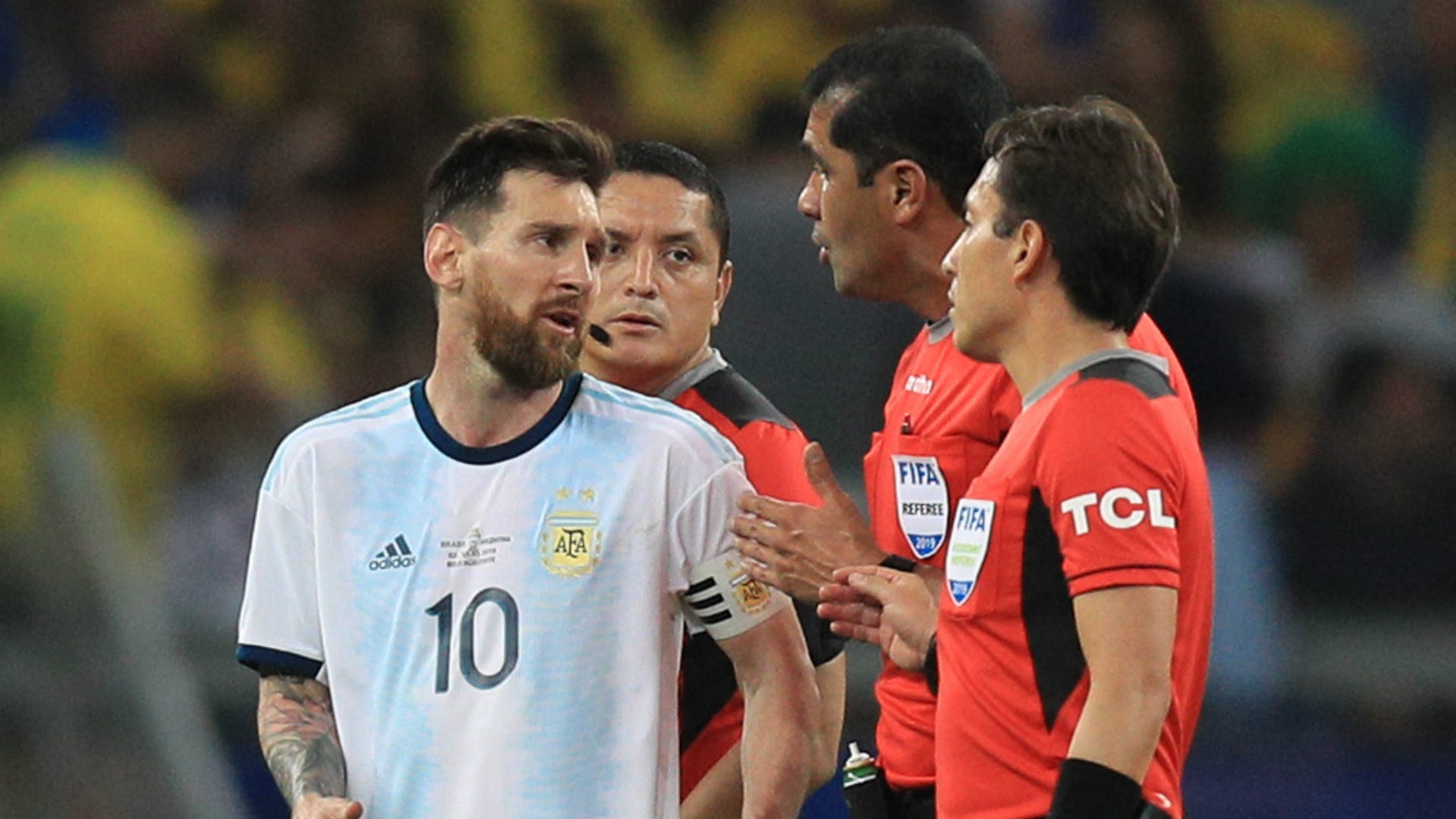 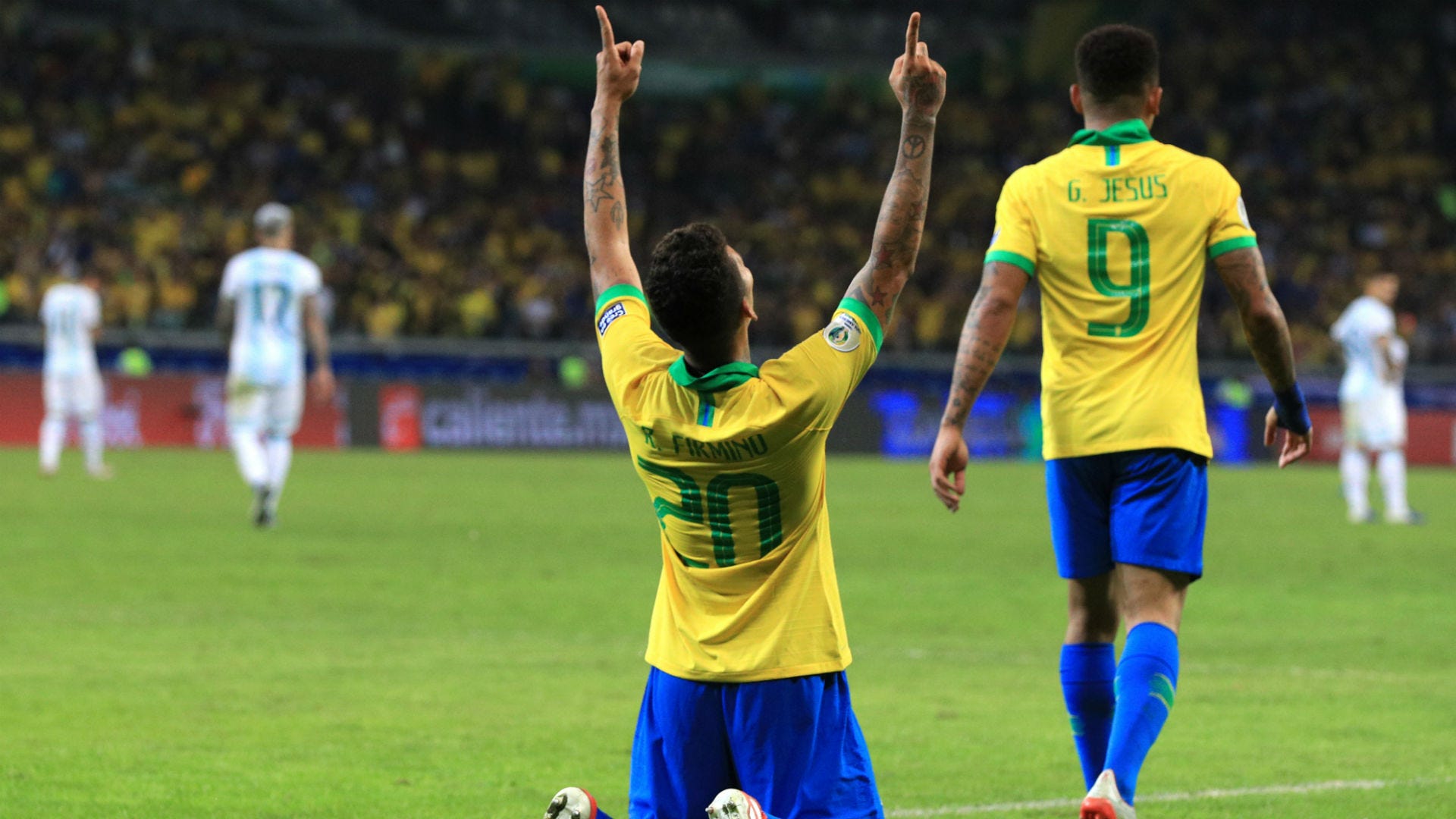 “We showed without a doubt that this group of players feel the shirt like nobody else,” coach Lionel Scaloni beamed after the final whistle. “Brazil were put under the cosh by Argentina at some points. It is the best game we played at this Copa because of the quality of the opponent and what we created.

“We played a complete game, but it was not good enough to go through. We felt we were superior but playing in the final was the key and we couldn't do it.”

While Scaloni, perhaps feeling more than a little relief after avoiding what could have been a Copa humiliation after those first games, may be exaggerating the Argentine contribution to a game which Brazil always seemed to have under control, there were plenty of positives. Tite's men were restricted to just four shots all evening, while Argentina enjoyed slight superiority in possession and struck the woodwork twice, through Aguero and Messi.

On another day, perhaps against a less imperious Dani Alves, a less motivated Gabriel Jesus or with a referee who did not have a seeming phobia of VAR in the face of two solid penalty shouts for the Albiceleste, the result may have been different. As it is, Argentina now move on to the future, which looks rather brighter now than it did even as recently as two weeks ago.

With the likes of Leandro Paredes, Lautaro Martinez, Rodrigo De Paul and Juan Foyth, and to a lesser extent German Pezzella and Giovani Lo Celso, the core of a young, adventurous and fearless team that can lead the nation through World Cup qualifying and into Qatar has begun to emerge.

To that list can be added River and Racing pair Exequiel Palacios and Matias Zaracho, ruled out of the Copa through injury; Zenit defender Emanuel Mammana, recently returned from cruciate ligament surgery; and even Paulo Dybala, who was again sparsely used at a major tournament. The defence will need an overhaul, with serious question marks over Otamendi and the subdued Nicolas Tagliafico, but in attack at least a clear trio has emerged – and it will include the captain. 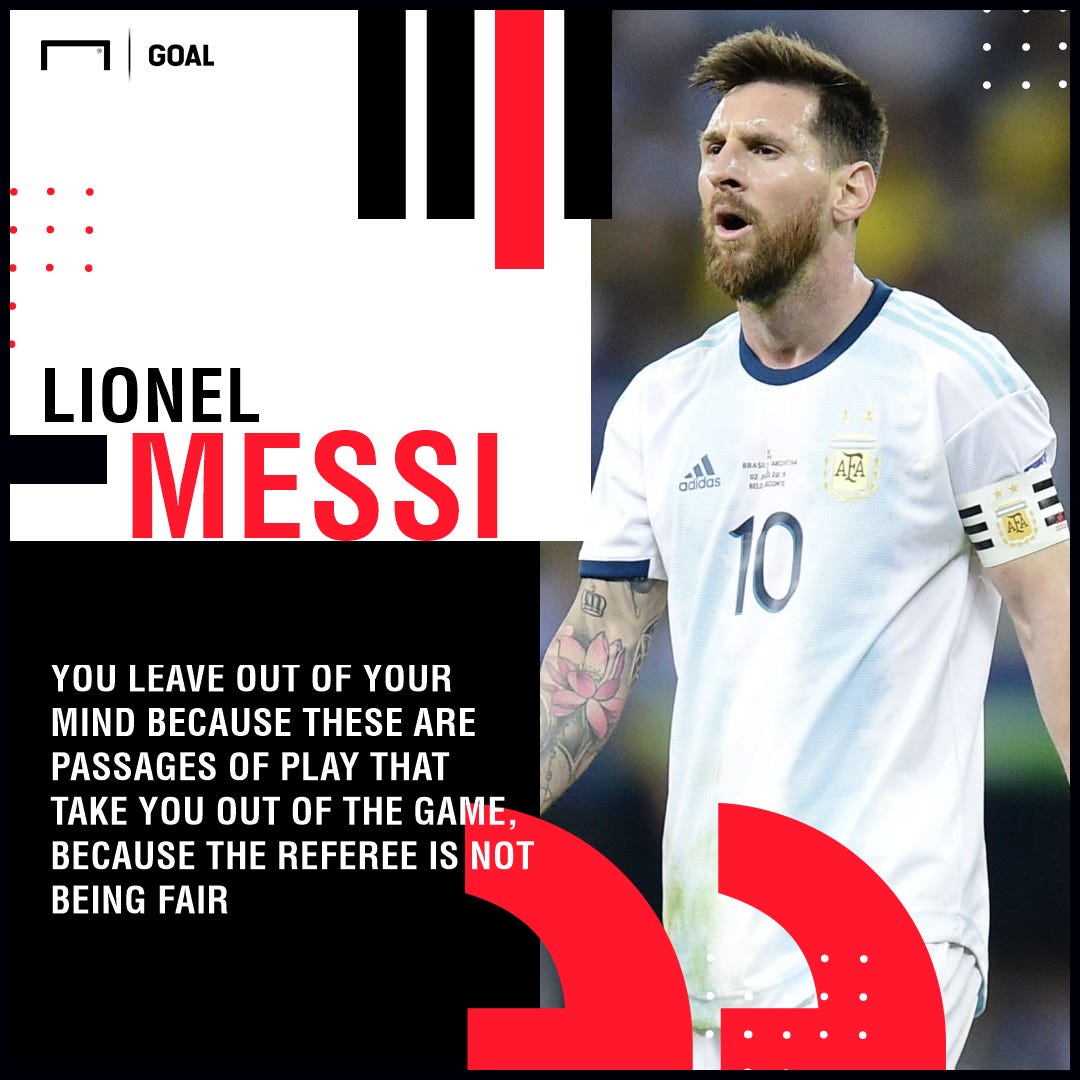 Any prospect of Messi repeating previous dices with international retirement was dashed minutes after the final whistle in Belo Horizonte, as he launched into a furious tirade against referee Roddy Zambrano.

“You leave out of your mind because these are passages of play that take you out of the game, because the referee is not being fair,” he fumed to TyC Sports, defiant and combative where previously after defeat he has cut a broken, resigned figure. That rant, so out of character for the softly spoken captain, more than anything else seems to confirm he will be back for yet another shot at the title next year in Argentina.

Brazil did not see the best of Messi. The Barca superstar struggled to reproduce his true form in adverse circumstances and saved his finest display for the end as he came so close to pulling his nation back into the semi-final. But from his rousing rendition of the national anthem prior to kick-off to his livid temper after the final whistle, it is clear that he wants more than anything to succeed with the Albiceleste.

He will not be alone. As this writer wrote prior to Tuesday's Superclasico, the first signs of a solid, functioning team that could break its historic dependency on Messi had appeared on the horizon, a fact only confirmed despite this defeat.

Changes will have to be made once the pointless formality of Saturday's third-place play-off is out of the way, starting right at the top with a serious evaluation of Scaloni's position and his possible replacements, and several places are still up for grabs. But, overall, Argentina leave the Copa America a far better team than when they arrived.