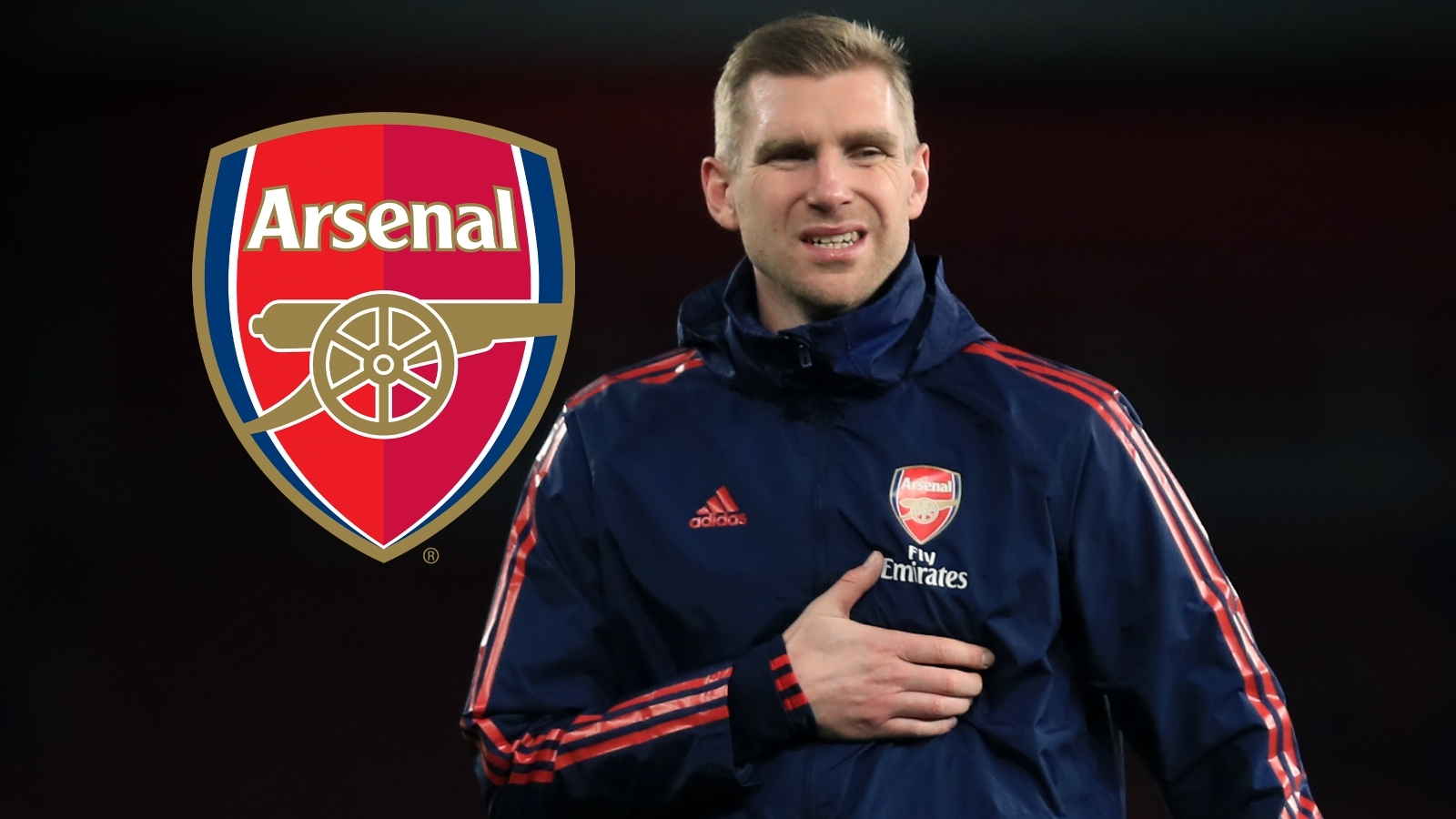 The former Gunners defender was given the job of academy manager by Arsene Wenger and Ivan Gazidis in 2017, and is justifying their show of faith

When it was announced in July 2017 that Per Mertesacker was to become Arsenal’s new academy manager at the end of the 2017-18 season, there were plenty of eyebrows raised.

The German defender hadn’t even retired as a player when Arsene Wenger and Ivan Gazidis, Arsenal’s former CEO, entrusted him with one of the most important positions at the club.

Other than doing some coaching with the youth teams while he was injured, Mertesacker had no real experience for a role of such magnitude, but Wenger was convinced that the centre-half was the right man to take the academy forward.

“Per is an exceptional character who is a great example for young players,” said the legendary Frenchman. “He is a deep thinker about the game and committed to helping players fulfil their potential. He will be an inspirational figure for everyone connected with the academy.”

Now, more than four years on from the announcement, Mertesacker is proving to be exactly that.

The World Cup winner, who won three FA Cups during his time as a player with Arsenal, has helped revolutionise the academy during a period of huge change behind the scenes in north London.

From education to player recruitment and the loan market, Mertesacker has overseen a big shift in emphasis in how Hale End operates and Arsenal are beginning to reap the benefits.

“Per is a popular guy, who is a former top footballer,” one source, who has regular dealings with Mertesacker and the Arsenal academy, told Goal. “You can’t really argue with him. He knows what it takes to transition from an academy to be a top player.

“Since he’s taken the job, he’s applied himself in terms of understanding how to work and how important management is of a young player on a one-to-one basis. He has the respect of the boys and the respect of the families. He ticks a lot of boxes.”

Mertesacker has transformed Arsenal’s academy since he arrived, pushing through vast amounts of change.

The scouting network has been completely shaken up, with the highly respected Steve Morrow being replaced soon after the German was appointed following a stringent review of the recruitment department.

Lee Herron, who had been head of football operations at the academy following his arrival from Reading in 2018, took up the role of head of talent ID, replacing Morrow.

Herron was tasked with leading the new talent ID department and building a new team to replace the figures that had been moved on, with the likes of Steve Brown (lead talent ID co-ordinator), Ayo Durojaiye (under-9s-U11s), Phil Antwi (U12s-U14s) and Conan Watson (U15s-U16s) joining the new recruitment team.

On the coaching side of things, there have also been major changes.

Arsenal legend Steve Bould was let go at the end of last season after two years in charge of the U23s. With a hugely talented batch of youngsters coming through, Mertesacker wanted a more forward-thinking, modern coach to guide the likes of Charlie Patino, Omari Hutchinson, Kido Taylor-Hart and Zane Monlouis over the next couple of years.

So, Kevin Betsy, who had been England U18s head coach, was brought in after an extensive interview process and the 43-year-old has already made a big impact.

The U23s were almost relegated from Premier League 2 last season but they now sit third after the opening eight games of the current campaign, having already scored 21 goals.

Mertesacker also appointed a new U18s coach in the summer, with Dan Micciche – who had previously coached the club’s U15 and U16 players – stepping up to replace Ken Gillard, who now works as Betsy's assistant with the U23s.

Elsewhere, Terry Mason arrived from Southend United and replaced Andy Woodman as the academy’s head of goalkeeping, while Tony Strudwick was brought in from Sheffield Wednesday to be the academy’s new head of sports science and medicine.

💭 "Kevin's had very strong experiences through academy and youth football, and has a wealth of knowledge and ability. Kevin will drive us to continue to deliver on our vision to develop and build strong young Gunners." @mertesacker on our new #AFCU23 Head Coach, Kevin Betsy 🗣 pic.twitter.com/o0PFyJOMfX

“I think what everyone has to remember is the players are the most important thing in the academy at Hale End. It’s about trying to get the best out of them, surrounding them with good coaches and good people. Per is doing a great job with that.”

Wilshere has spent some time working with Mertesacker in recent weeks following his return to Arsenal.

The former Gunners midfielder has been invited back to get himself fit ahead of the January transfer window by first-team boss Mikel Arteta, but he has also been given permission by Mertesacker to do some coaching with the U23s as he works towards receiving his UEFA A license.

That has allowed the former Arsenal team-mates to catch up once again and they did just that as they sat together and watched Arsenal U21s beat Newport County in the EFL Trophy last week.

For Wilshere, the past couple of weeks have given him the opportunity to get some valuable insight into how Mertesacker operates and he has been more than impressed.

“I hadn’t seen Per in two or three years and hadn’t seen what the academy had done," said the 29-year-old. “So, sitting with him the last couple of weeks, listening to him and going to games with him has been great.

“He’s done a great job and it was a tough job as well because it is such a big role for someone who had no experience in that job.

“He's helped bring through some good players, they’ve obviously got some players out on loan as well who are going to have good careers. It’s about managing them correctly. I think he's doing a great job.”

One of the major changes Mertesacker has implemented at academy level is the way the club now looks to utilise the loan market. In recent seasons, far more youngsters have been sent out to learn their trade – either in the lower leagues across England or abroad.

Ben Knapper, who had been an analyst at the club, was promoted to the position of loan manager in February 2019 and together he and Mertesacker have transformed Arsenal’s approach to the market.

They have now brought the club’s policy in line with Chelsea, with the aim of ensuring that players get the development and exposure they need in senior football, which will allow the club to receive maximum return on their investment, even if the players don’t go on to break into the first-team picture at Arsenal.

“The shift in the way they operate means it is now very much about the transition [to senior football] for the players,” one source said. “It’s about producing for the first team or to sell. That’s what the top clubs do. It’s something Arsenal have now realised, and Ben and Per are key to that.”

One player who is benefitting massively from heading out on loan is Daniel Ballard. The 22-year-old centre back played a huge part in Blackpool’s promotion to the Championship last season and is now with Millwall.

Whether he has a long-term future at Arsenal remains to be seen, but his impressive progress over the last two seasons – which has seen him become an established international for Northern Ireland – means the club will be able to demand a substantial transfer fee for him should they decide to sell.

Chelsea have brought in vast amounts of money working to that type of model over the past decade and Mertesacker, along with Knapper and technical director Edu, are now determined to do the same.

It’s all about maximising revenue from the massive investment Arsenal have made in Hale End in recent times.

Last summer, Arsenal brought in numerous players, both from domestic football and from abroad, to supplement their youth teams.
Tim Akinola was signed after being released by Huddersfield, while Jonathan Dinzeyi was picked up after leaving Tottenham. Dutch winger Joel Ideho arrived from Ajax, Norwegian attacker George Lewis signed on a free transfer and striker Nikolaj Moller joined from Ajax.

There were other additions too, like Salah-Eddine Oulad M’Hand and his brother Ismeal, who signed from Feyenoord, Omar Rekik who joined from Hertha Berlin and Amani Richards, who had been with Chelsea.

It was a big shift away from Arsenal's usual youth transfer policy, but one that was deemed essential because of the number of players who were sent out on loan.

It was also a move designed towards generating a substantial profit a few years down the line, when the players who have been unable to push their way into the first-team picture are moved on.

“There are many different ways in which I’d like to see the academy progress,” Mertesacker said during a recent interview with Arsenal’s matchday magazine. “After these three years in the position, I’ve realised how big a project this is for me. It’s not going to be achieved and completed in three years – it has a longer cycle.

“The academy has always been in a good place. It’s always produced and has always been at the forefront of trying to move forward. And that’s exactly what I’m trying to do. I’m not going to change everything but I want to make a difference for every single person who enters the academy.”

Mertesacker certainly has made a difference – both to the way the academy operates and the youngsters who are progressing within it. Sources suggest a harmony exists across the age groups and the coaching departments, something that perhaps has not always been the case.

And several of the club’s best young talents have signed new contracts in recent months – a clear sign that both they and their families believe in the way their young careers are being managed.

Mertesacker may still be a relative rookie in his role and much of his work may go unnoticed by many, but his impressive impact behind the scenes at Arsenal suggest the decision taken by Wenger and Gazidis back in 2017 was an inspired one.