Players switching clubs once their contracts expire is now taken granted, but the rule books had to be re-written in order to make that possible

Free transfers are now an everyday occurrence in modern football, with players often deciding to run down their contracts in order to secure a move elsewhere.

In such instances, there is no need for a fee to change hands - but that was not always the case.

It took a historic court case in 1995 to make such freedom of movement possible. So what is the Bosman Ruling and how did it influence the transfer market? GOAL takes a look…

What is a free transfer in football?

A free transfer occurs when any given player reaches the end of their contract and no fresh terms are agreed.

At that stage, with no legal bond between two parties, decisions can be made to take on a new challenge.

Contracts in European football tend to expire over the summer, when domestic competition comes to a close.

Players preparing to become a free agent are able to discuss pre-contract agreements with teams outside the country they play in from six months prior to their deal expiring.

With no transfer fee involved in moves such as this, lucrative contracts and signing-on bonuses are common, with recruiting sides able to invest more funds into the player themselves.

What is the Bosman Ruling? 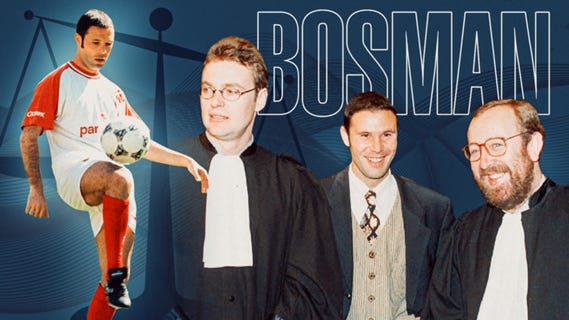 All of this is possible due to the Bosman Ruling that changed the face of football forever.

Jean-Marc Bosman was a player at Belgian side RFC Liege when reaching the end of his contract in 1990.

He wanted to leave for French outfit Dunkerque, but they refused to meet Liege’s transfer demands and no deal was done.

Bosman’s wages were cut by 70 per cent as he was no longer a registered first-team player, and he decided to take his case to the European Court of Justice in Luxembourg – where he sued his Belgian employers for restraint of trade.

In 1995, a ruling was passed regarding the free movement of labour for professional footballers, with restrictions lifted on players in the EU when it came to transfer fees being paid for those working without a contract.

In the United Kingdom, tribunals had been in place since 1981 – and are still used at times when it comes to home-grown players under the age of 24 – but those restrictions were removed as free agents became a familiar part of of the game.

Did the Bosman ruling change anything else?

It was not just transfer matters that the Bosman case influenced, with other restrictions lifted when it came to European football.

A 'three-plus-two' rule had existed prior to a landmark case, with teams prevented from using more than three foreign players in any continental squad, while also having to include at least two that had graduated through the club’s youth ranks.

English teams were hit hard by those rules, with it determined in 1994 that Welsh and Scottish players would be considered ‘foreign’.

Once the Bosman Ruling was pushed through, sides were free to play as many EU players as they liked, with restrictions only being imposed when it comes to non-EU footballers.