In an exclusive interview with GOAL, the former forward reveals how tough it was for him to quit Anfield and how he had always hoped to return

"Every single team that goes up against Liverpool looks at the same thing: their high-risk, high-reward high line," the retired forward tells GOAL.

"Vinicius Junior is quick, so Real will try to counterattack. They're going to try to exploit the space in behind Trent when he goes forward. That has to be Madrid's plan."

Of course, as Mike Tyson famously said, everyone has a plan until they get punched in the mouth.

"That's exactly it!" Owen says, laughing. "Madrid will try to capitalise on what they perceive as a weak link in Liverpool's tactics, but few teams actually manage to pull it off."

Owen, of course, knows a thing or two about the vulnerability of best-laid plans.

In the summer of 2004, Owen was presented with a heart-wrenching dilemma: stay at childhood club Liverpool or move to Madrid?

He was already a legend on Merseyside, having won the Ballon d'Or for the role he played in the Reds winning four cups in 2001. 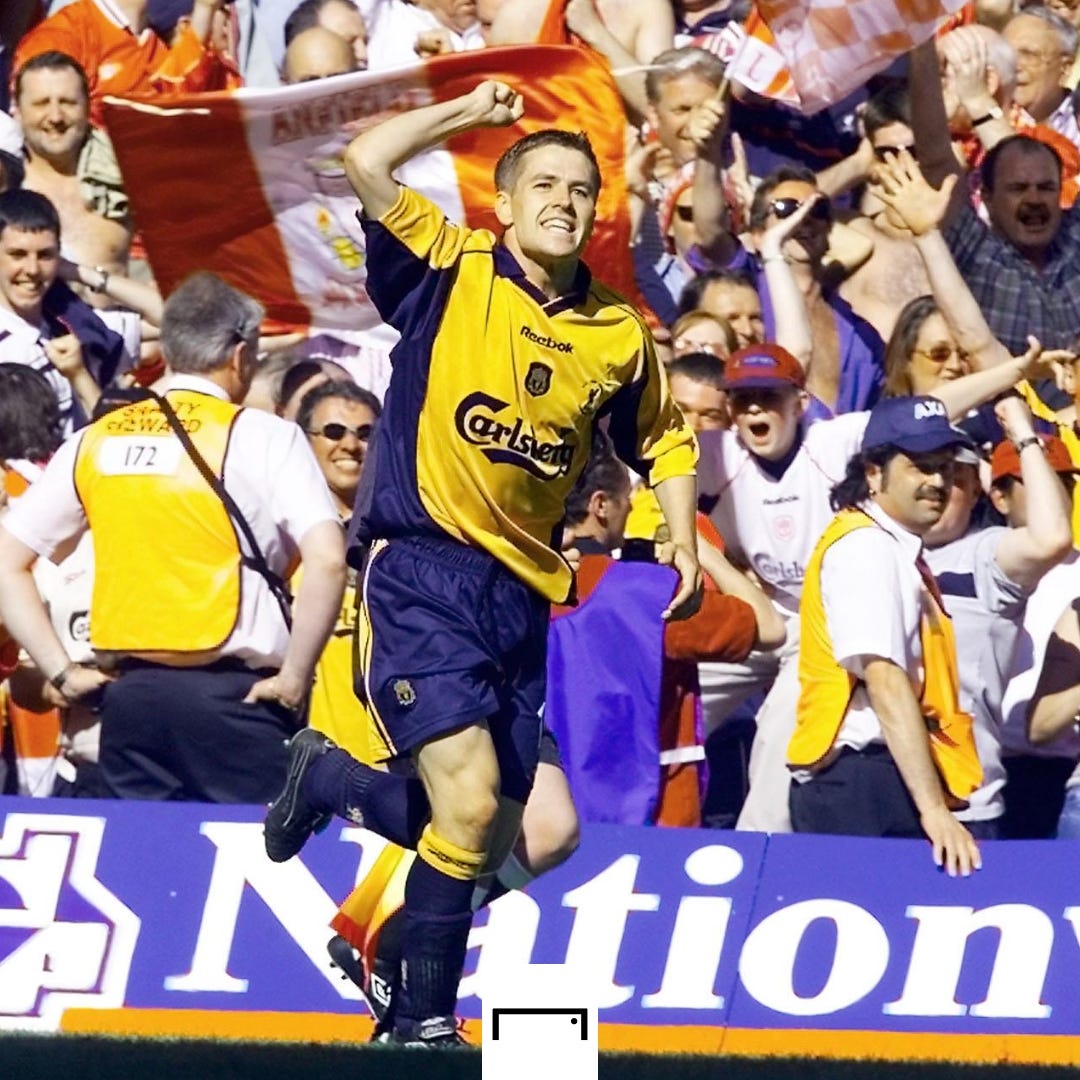 However, the lure of Madrid proved too difficult to turn down.

"I didn't sleep for a week beforehand," he says. "And even on the drive to the airport, I was crying my eyes out, I don't mind telling you.

"You think you're gonna be a Liverpool player for life but then you think, 'Oh my God, it's Real Madrid – I'll regret this forever if I say no.'

"It was about being able to play in that famous white kit, to play in the Bernabeu, to play with Zidane, Figo, Beckham, Roberto Carlos.

"But even then, two seconds later I was thinking, 'No, I wanna be at Liverpool for the rest of my life.'

"So, it was just one of those really tough, life-changing calls."

Owen, though, tried to take out something of an insurance policy.

"Even after I made the decision to go, I was also comforting myself by thinking, 'Ian Rush left Liverpool for Juventus and he came back, so I could maybe do that too.'" he explains.

"So, before I left, I spoke to Rick Parry, who was the chief executive at the time, 'Can we just have like a gentleman's agreement that you'll buy me back after I've done a couple of years in Madrid?'

"And we did that, but you never can plan your career perfectly. I didn't get the chance to spend the rest of my career at Liverpool but I had an incredible experience in Madrid." 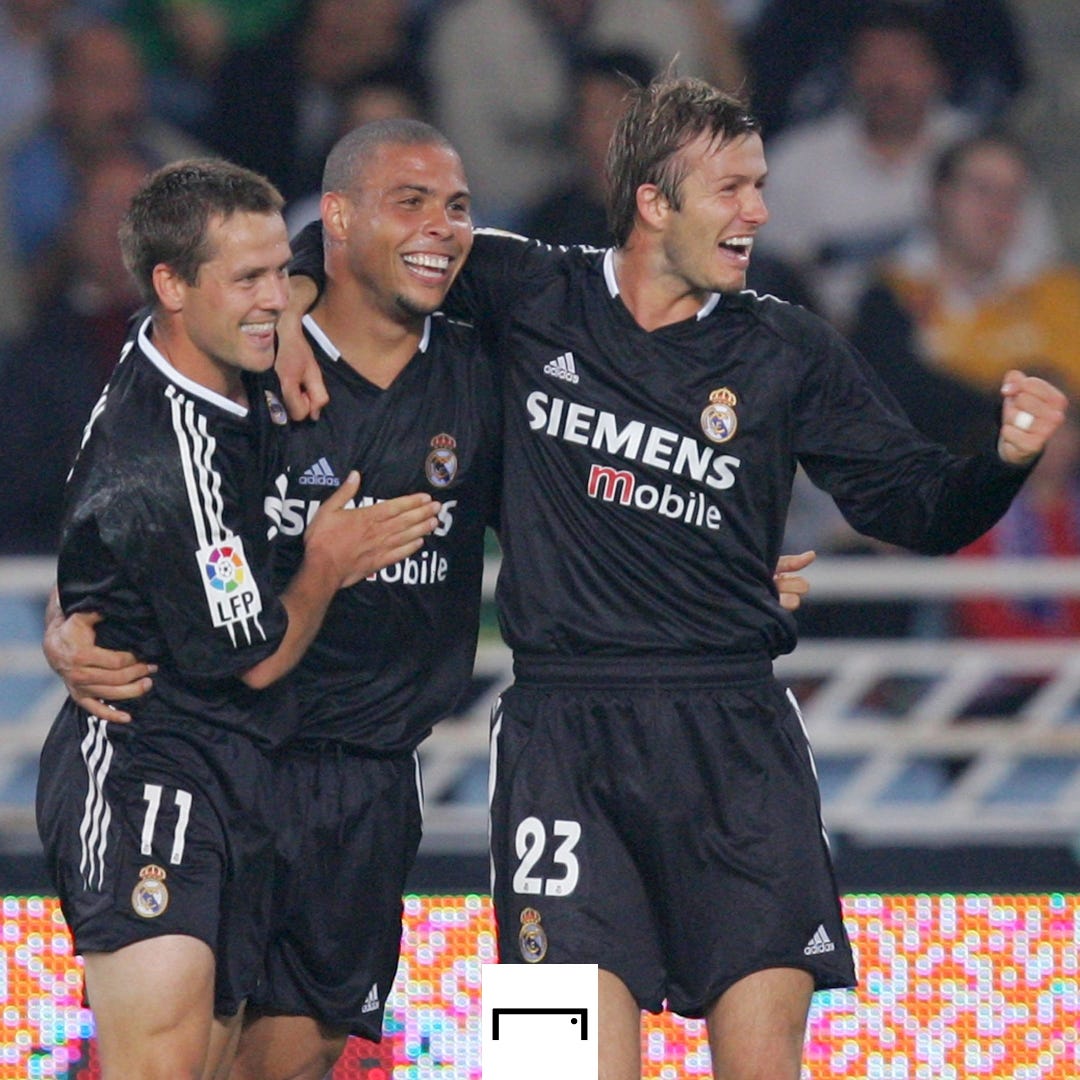 Owen, of course, was already a superstar in his own right, having first illuminated a World Cup at the age of 18, so was he excited or nervous when he first entered the dressing room?

"A bit of both," he confesses. "No matter what you do for a living, you go into a new place of work, you're going to be a little excited and a little nervous.

"But I think the overriding feeling was that I felt good about myself. I'd just won the Ballon d'Or, so I wasn't going in there thinking that everyone was better than me. I was actually really eager to get training to show everyone I was good enough.

"When you go to a new club, you always want to gain everyone's respect straight away. Respect from the fans or even the manager can come later.

"But I wanted to earn the respect of my team-mates straight away. In the training sessions, you had different types of players.

"Some of them didn't have amazing ability but they worked their nuts off to compensate. Then, you get guys that are an absolute genius on the ball, but they do no work.

"However, sometimes in football you come across a genius that also works hard – and that was Zidane. He was a magician but the ultimate professional.

"So, I wanted Zidane to pass me the ball when I was marked. I wanted Ronaldo to give it to me when I had three players around me. You want their respect above anything else.

"If they don't have faith in yourself and your talent, it's hard to come back from that; it's hard to integrate.

"So, I couldn't wait to get training and show them that I was a proper player, one that they could trust with the ball." 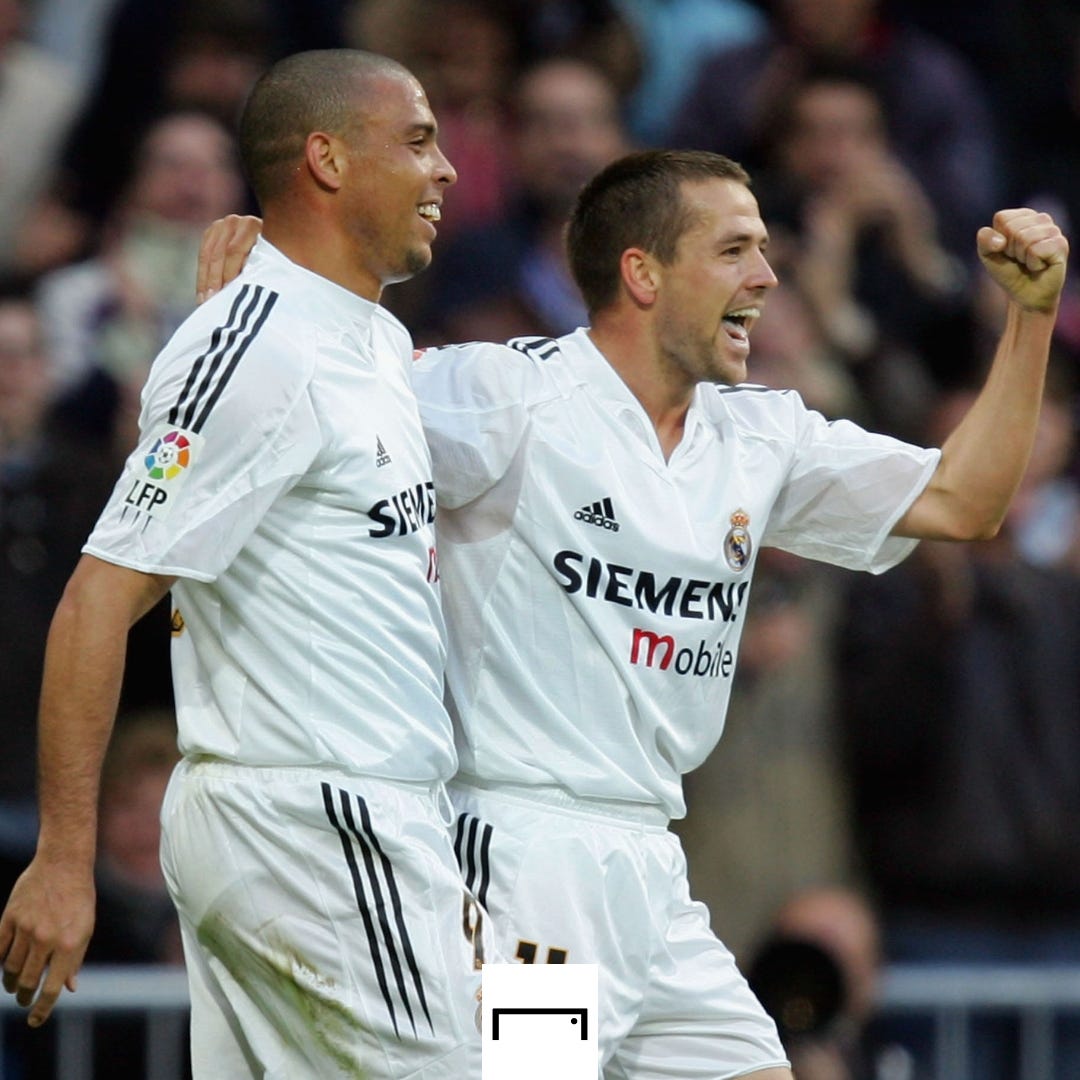 Owen quickly won over his colleagues. But convincing the coach that he was worthy of a starting spot wasn't always so easy.

For starters, 2004-05 was a turbulent season for Madrid. They ran through three coaches during the course of the campaign: Jose Antonio Camacho, Mariano Garcia Remon and Vanderlei Luxemburgo.

And their shared problem was how to fit so much attacking talent into a functioning, balanced line-up.

Owen was often the odd man out, spending more time on the bench than he would have liked.

However, when he played, he impressed, scoring 16 times in all competitions, including once in a Clasico win over Barcelona. Indeed, it's worth pointing out that he ended the season with a better goals-to-minutes ratio than the great Ronaldo.

Nonetheless, when Madrid received an offer from Newcastle during the summer of 2005, Perez essentially allowed Owen to decide whether they should accept it.

"Football-wise, I absolutely loved it," he reveals. "I felt at home and very able on the pitch.

"I think the impression that people have, or had, of my time over there was that I was always coming off the bench. But I started a lot of games. I was very involved.

"I wasn't confident, though, that I was going to start as many games the following season, because Madrid had just signed Julio Baptista and Robinho.

"We already had Fernando Morientes, Raul and Ronaldo on the books, so I was thinking, 'God, I've got a World Cup coming up at the end of next season, I don't fancy being on the bench a lot.'

"My wife was also homesick and while I wasn't desperate to get out, Madrid said to me during the summer, 'Look, we're happy for you to stay, but we've received a bid and are also happy to accept it if you want to go home.'

"So, the ball was left in my court and, after weighing it up, I decided to return to the Premier League, which I knew I was going to do eventually anyway; I knew that was my long-term future.

"I'd had the experience of playing overseas that I had wanted and I was a little concerned by the prospect of losing my starting spot in the England team ahead of the World Cup." 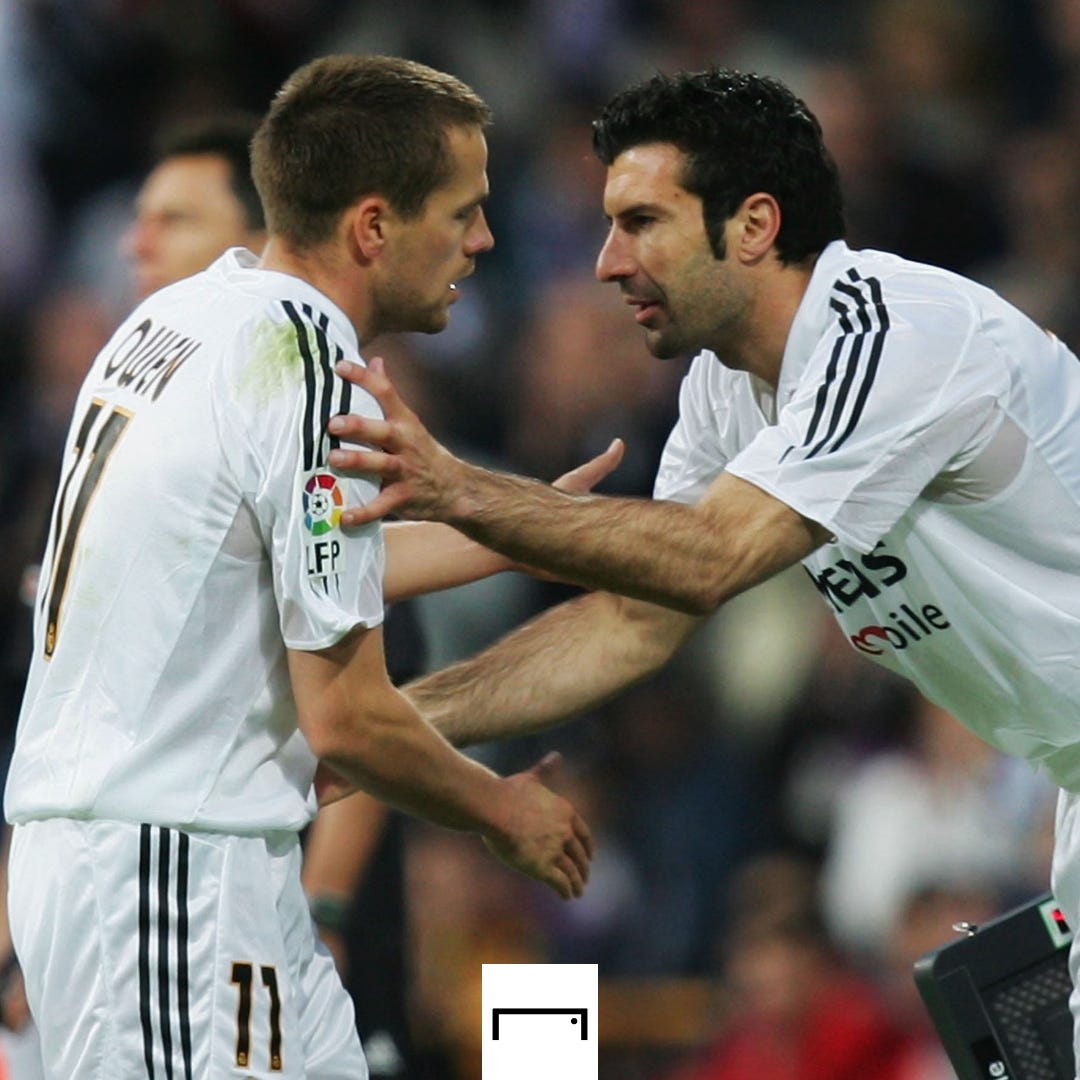 Owen obviously would have loved to have returned to Anfield. Just as much as he would still like to be playing today for Jurgen Klopp's Liverpool.

The former forward has nothing but admiration for the German manager and his "mentality monsters". However, the Reds' remarkable resilience will obviously be put to the test in Paris on Saturday night.

Madrid, after all, are the game's great aristocrats, they boast a powerful sense of entitlement when it comes to the European Cup, which has helped them pull off one miracle after another on their rousing run to this season's Champions League final.

In Karim Benzema, they also boast the Ballon d'Or frontrunner.Owen has nothing but admiration for the French forward, but he is adamant that Liverpool could not have a better man to mark Benzema than Virgil Van Dijk.

"It's funny, because there's not one particular thing that terrifies you from a defensive perspective.

"Like, if I were Virgil Van Dijk going to bed the night before the game, I wouldn't be thinking, 'I'll have to drop deep as Benzema might exploit the space in behind because he's so quick. Or he might beat me in the air because he's so tall.'

"I'd be losing sleep if I were a defender and about to go up against Kylian Mbappe because he's so fast and skilful that he can do things that will absolutely embarrass you.

"But he has to make sure that he's focused at all times in the final. Because if you blink against Benzema, he will score.

"He's such a good finisher and has such a great temperament. His hold-up play is brilliant, he's got everything. He's just a brilliant all-round striker; a complete No.9.

"He's 34 now yet he seems to be getting better. He's had such a good season, he's just grown into being the focal point of the team after Ronaldo's exit. He's had to carry the attack but it's made him stronger.

"He's (Van Dijk) the best I've ever seen and I've played against some great centre-halves.

"At the minute, he might not go down as the game's greatest ever centre-half, because people will say he's not won everything or he's not yet been at the top for like 20 years.

"I would argue that you could put any defender in the history of the game against Van Dijk, and I'm not sure there's a better one.

"I mean, who's better than him? I've only been on this planet 40 years but I've not seen anyone!"

So, while Madrid might have a plan, Liverpool have the man to leave it in tatters.