Perth Glory coach Kenny Lowe wants a marquee striker to finish off his squad as he looks to turn last season's weakest attacking side into a title challenger.

Lowe wants a partner for Irish striker Andy Keogh, who has already scored six goals in the lead-up to the 2014-15 A-League campaign, including a double in the Glory's 2-0 win over Newcastle Jets in the FFA Cup's round of 32 last month.

ANDY KEOGH | Another game, another goal! Get your Glory membership now to see Andy in action: http://t.co/PNemqK93Hv pic.twitter.com/o3rLaZMGGl

With Perth set to play a diamond midfield in a 4-4-2 formation, Lowe will need a forward duo to finish off the work of his impressive group of attacking midfielders, and the 52-year-old Englishman is willing to throw top dollar at the right recruit.

Lowe has one more spot free in his squad and will be targeting a marquee striker - either international or Australian - to complete his pre-season recruitment.

"Whether we fill that or not I don't know, I'm certainly trying to fill it, whether we do fill it or not all depends on personnel, finances, logistics, the usual scenarios," Perth's coach told Goal after his side's 3-0 friendly loss to Melbourne Victory.

"But yeah, it'd be good if we could get another player up alongside Keogh. I think then you would see a real change...you add that in there and you could do really well with a little bit of luck." 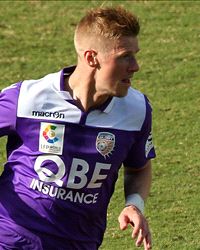 Perth scored just 28 goals last season in 27 matches - the worst attacking output of any A-League side.

While the Glory's marquee in 2013-14 - William Gallas - struggled to string consecutive games together due to a raft of injuries, Lowe is keen to try again, although this time up front.

With marquee wages on offer - despite speculation in the British press, Keogh will be paid under the salary cap - Perth could potentially attract a big name with the likes of Portugal international Hugo Almeida and former Qatar-based Brazilian striker Nilmar still looking for clubs this season.

Another option for Glory could be to try and lure one of the club's favourite sons - Nikita Rukavytsya - back to Perth as an Australian marquee.

Rukavytsya, 27, arguably enjoyed the best years of his career in purple, scoring 16 goals in 42 A-League games between 2007 and 2009, including 10 in his final campaign before leaving for Europe.

The Ukraine-born forward has struggled to settle in Europe, playing for five different clubs, and has yet to appear for Bundesliga outfit Mainz this season, meaning he might be tempted to come home to resurrect his career.

Playing ahead of the likes of Youssouf Hersi, Mitch Nichols, Nebojsa Marinkovic and Daniel De Silva - a strike force of Keogh and Rukavytsya could thrive, ensuring the glory days of the National Soccer League-era return to Perth in the A-League's 10th season.