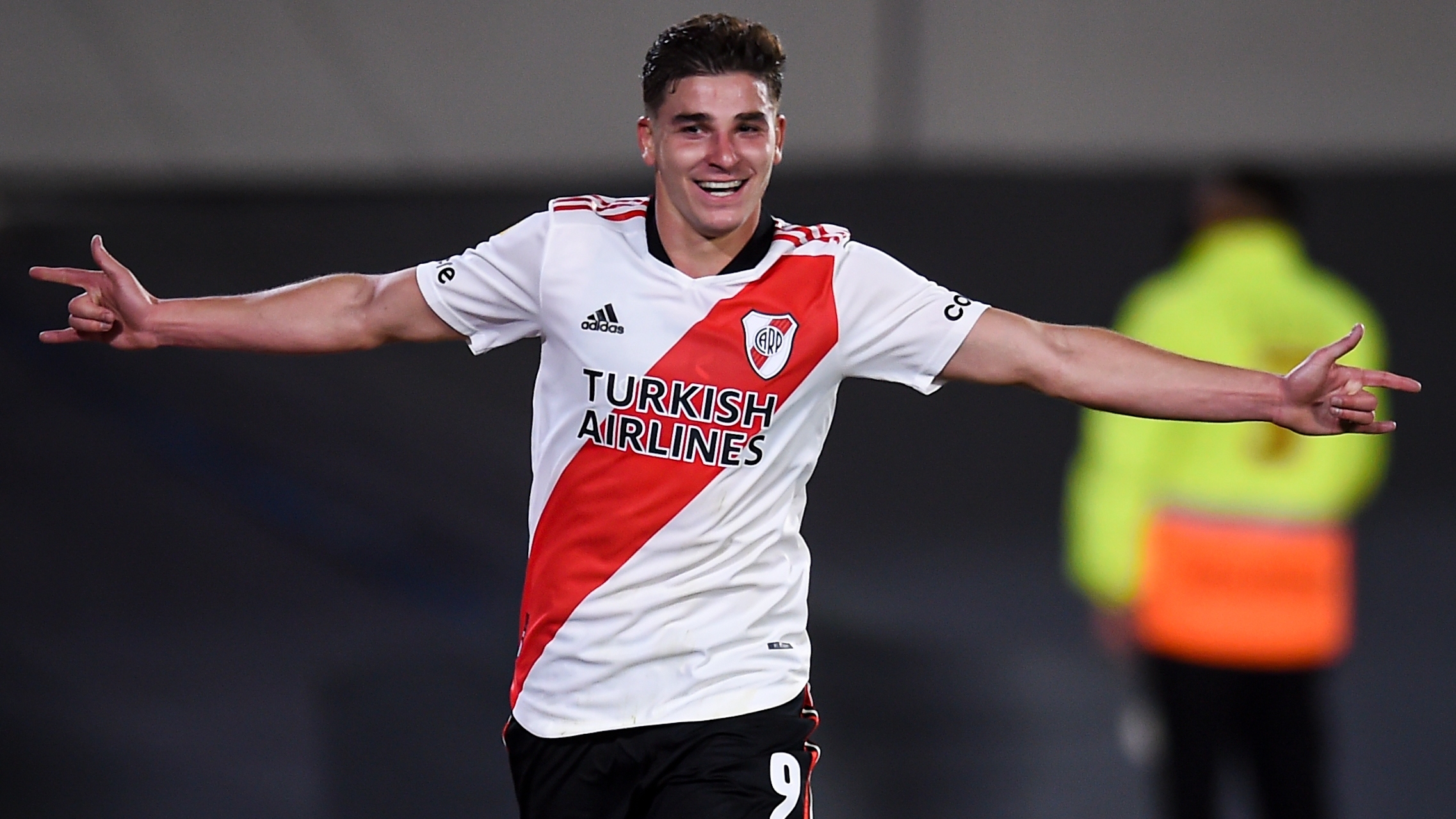 It is fair to say that domestic Argentine football has been struggling as of late.

Already strapped for cash after years of economic instability, the coronavirus pandemic has only heightened the financial hardships suffered by most clubs, leading to an exodus of talent and a corresponding sharp drop in performance levels across the board.

Not all is doom and gloom, however. In River Plate gem Julian Alvarez the Liga Profesional has unearthed a genuine young superstar, the best new talent to emerge from the league in years.

Success seems to come naturally to Alvarez. At just 21 years of age the native of Calchin, Cordoba already boasts winners' medals in each of South America's biggest competitions, the Copa Libertadores and Copa America, although he played just one game for club and country in each tournament.

His Libertadores debut, in fact, came in that final against Boca Juniors at the Santiago Bernabeu, as a late substitute for Exequiel Palacios.

Despite that early promise, he was initially used sparingly by long-time River coach Marcelo Gallardo, netting 10 times in his first two seasons with the senior squad and mostly appearing off the bench or as a utility attacking player.

Now, though, he has stepped up a gear. Alvarez has already reached double figures this term, having smashed eight in his last five outings – including a memorable double to down Boca in October's Superclasico and his first senior hat-trick on Sunday against San Lorenzo.

He has contributed a further four assists for good measure as River have rocketed to the top of the table with six consecutive wins.

The youngster is now the Liga Profesional's top scorer alongside Godoy Cruz's Martin Ojeda and remarkable Lanus veteran Jose Sand – two decades Alvarez's senior at 41 – and also gave a good account of himself as the division's sole outfield representative in the Argentina team with cameos against Paraguay and Uruguay in October's World Cup qualifiers.

“Everybody is talking about Julian. I saw his very first game and was already in love,” the gravel-voiced coach told Radio Mitre . “He is savvy, quick, he's got a bit of magic about him.

“He can work out deep, one on one, he moves into space, he's explosive... did you see his commitment and how he moves? I love how he plays.”

As has occurred so often during Gallardo's seven years in charge at the Monumental, Alvarez's sudden emergence as a deadly striker is a product of the River idol making a virtue out of necessity.

Having lost Colombia striker Rafael Borre to Frankfurt over the summer and then seeing first-choice forward pair Matias Suarez and Braian Romero struggle with injury, Gallardo had no choice but to move the winger inside to centre-forward.

The results have been spectacular; Alvarez immediately showed he could replicate his dynamic movement inside the box and finish his chances, with his movement and positioning at No.9 somewhat reminiscent of a young Sergio Aguero.

While his coach is understandably keen to keep the pressure off his back – telling reporters last week that “he is still young, a lot's happened to him all of a sudden and that can be counter-productive” - the sky appears to be the limit for River's latest young star.

Which begs the inevitable question: for just how long will the Monumental faithful, who were finally able to re-enter their home following 18 months of Covid-linked restrictions just in time to celebrate that Superclasico win, be able to enjoy Alvarez's scintillating talents before Europe comes knocking?

Alvarez in fact enjoyed a taste of life across the Atlantic Ocean even before moving to River, trialling at Real Madrid at the age of 11 and posing for photos with the likes of Gonzalo Higuain, Sergio Ramos and Angel Di Maria.

Age-related transfer restrictions put paid to any hopes he may have had of joining the club back then, but it seems only a matter of time before he joins Palacios, Lucas Martinez Quarta, Gonzalo Montiel, Lucas Alario and many others in using Gallardo's Millonario as a springboard to a European switch.

Aston Villa and Ajax were both mentioned as possible destinations in the last transfer window, while more recently Inter and AC Milan have reportedly entered the race, although agent Fernando Hidalgo insists there has been no formal contact.

“At the moment neither Inter nor Milan have called me,” he explained to FC Inter News . “I won't publicise Inter, I think Julian would do well with Ibrahimovic, with Lautaro [Martinez] or with some English champions. The most important factor is that it has to be a serious club.

"Alvarez has already got two years in the Primera Division on his back with River, who are a huge club who live under pressure. That's why Julian is already ready to compete at any top European club."

For now at least Alvarez remains focused on River, who are keen to extend his current deal (which expires in December 2022) and increase the release clause from its current sum of €25 million (£21m/ $29m).

He will once more be leading the line on Thursday as the Millo visit Talleres, who are their closest league challengers. Victory in Alvarez's home province of Cordoba would extend their lead to seven points with eight rounds remaining, strengthening hopes of a first league title for Gallardo as coach to sit alongside his two Libertadores crowns having twice finished second – most recently missing out to Boca in a gripping final day conclusion just before the pandemic hit in 2020.

Boca may also make a late bid for success this time round having improved drastically as of late, and if River hope to hold off their arch-rivals Alvarez's goals will likely be key over the next two months.

If he continues on the same track, even more silverware will surely not be far away, as well as the chance to eventually shine in one of Europe's elite sides - having already proved himself as a unique talent during these difficult days for Argentine football.